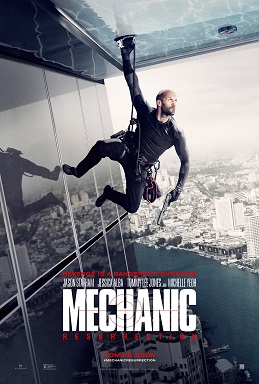 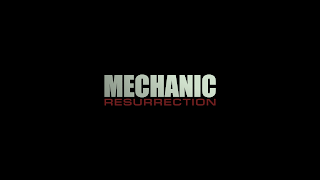 After surviving the gas station explosion at the end of the previous film, Bishop is kicking it back down in Rio until trouble comes knocking. He falls in love (is this the same Arthur Bishop?) and our villains utilize this as leverage for him to knock-off their competition in various parts of the world.

My serious problem with this sequel is the change in Frank Bishop’s character. “Mechanic: Resurrection” desperately tries to make Bishop a hero. Bishop is NOT a hero. He is an anti-hero: a cold blooded killer that meticulously plans out his assassinations for days, sometimes weeks at a time to carry them out flawlessly. The Frank Bishop we know is not a lover or even a caring man. Human life means nothing to him, however the filmmakers here have the balls to throw in a love interest in the form of Jessica Alba, whom his character predictably falls in love with and will do anything to protect. This “love interest” angle was only shoehorned in as a flimsy attempt for the antagonists to use as leverage to blackmail Bishop into killing the people they want. If the writers had any fuckin idea who the character actually was they could have easily been able to write a different motivation for Bishop. 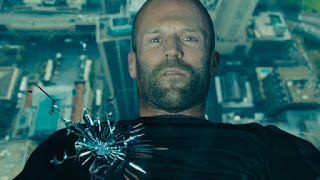 Due this uncharacteristic love interest for Bishop, a majority of the film is spent setting up his love interest and the portion we expect from a “Mechanic” film, as in time spent on how methodical he is on carefully planning each hit and making it look like an accident, is seeming put on fast forward mode. And when they do occur they tend to be overly silly (shark repellant anyone?) or ruined by absolutely horrid special effects (the skyscraper swimming pool scene). 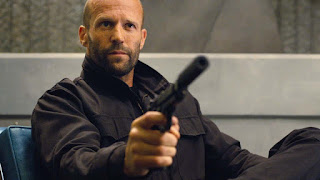 The film itself is also poorly shot with director Dennis Gansel taking his directing chops from the Paul “Shaky Mc-Shaky” Greengrass school of action directing by utilizing far too much shaky cam and framing too closely on our actors so one cannot fully focus on Statham’s amazing action choreography. Scenes with Statham kicking are mooted since we the camera is framed so we can’t even see his legs. With filmmaking tactics like this it makes one wonder why the filmmakers even choreographed the fight scenes as they could have easily used the shaky cam, poor framing and editing to hide the fact they didn’t. Even the over-the-top death sequences, like a man getting exploded a hot tub with a grenade, is met with jeers instead of cheers as the CGI is so horrid as it ruins any of the over-the-top fun out of the death. 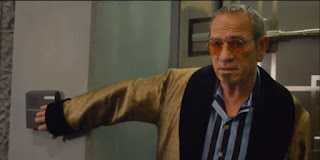 The 2011 remake was a dark, broodish film and this cartoonish lamentable follow-up tarnishes my surprise compassion for it despite it being a remake of one of my all-time favorite 70s action flicks. The more light-hearted tone (feels more like a "Transporter" film) could have worked if the film were better directed, edited and actually used real physical effects instead of ultra-lame CGI that was no better than a SYFY original movie (not to mention all the green screen shots). Also ditch the love interest and attempts to make Bishop a ‘hero’ and allow him to do what he does best – being a cold calculating killer. This proves that perhaps the filmmakers would have been better off using the original films ending as the climax to the remake as franchising this charter proved to be not so glorious. Then again the film did bank at the Chinese box office (no doubt due to a thankless supporting role by Michelle Yeoh) so be expecting a “Mechanic 3” sometime in the near future.

Written By Eric Reifschneider
Posted by Cronosmantas at 12:27 PM