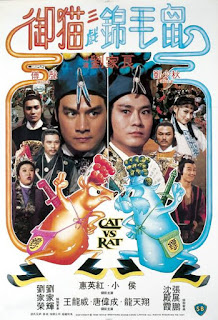 Jien Chiu (Adam Cheng Siu-Chow) and Bai Yu Tong (Alexander Fu Sheng) have been out to beat one another for a very long time. Both taught under the same teacher (Lau Kar-Wing), their skills are impeccable similar, but each one is out to be the better of the two. When the Emperor (Gordon Liu) shows up in town, the two unwittingly involve him in their duel which leads to a life or death confrontation where the two will have to work together to survive.

Truthfully, the synopsis I wrote above makes this film sound like a classic Shaw Brothers film, using themes about rivalry and loyalty to strike points about how the martial arts should be used. In damn near any other Liu Chia-Liang film I would assume that’s exactly how this film would play out and it was the assumption of this approach that made the film feel wholly misguided. Not only does Cat vs. Rat play almost every scene and character as a broadly painted joke, but it never feels the need to ground itself to any of the potential themes about brotherhood, justice, or loyalty that it hints towards. At times, it almost seems like this was the intent. That perhaps Liu Chia-Liang wanted to make a spoof of his own work, play up the gags, and just have fun. I can’t imagine that’s true, considering the rest of his filmography, but the relentless pursuit of this approach certainly has shades of being intentional. However, I’m sure it had more to do with the rising popularity of slapstick kung fu comedians like Jackie Chan and Sammo Hung of the time period and the replication of their success more than anything else.

Even then, if one were to assume that the intent was nothing more than to play out the kung fu tropes as a series of slap stick and over-emoted gags, Cat vs. Rat doesn’t necessarily even make that work as well as it might have. The film spends far too long establishing the rivalry between the two leads, of which it spends a substantial amount of time on Alexander Fu Sheng’s Rat and Jackie Chan-inspired performance than anyone else, and doesn’t introduce many of the actual plot elements that drive the story. The film only starts to really get interesting in the last 15 minutes of its run time, when the Cat and Rat are finally forced to work together to hunt down Rat’s gang and retrieve a Royal Seal for the Emperor and it showcases the buddy cop formula that might have worked to the film’s benefit had it come 30 minutes earlier, and it’s too late to truly salvage the film’s meandering narrative. In the meantime there are a lot of fun fight sequences that use Liu Chia-Liang’s stellar choreography to keep the audience intrigued and there are a handful of silly moments that might garner a chuckle, but it seems like a lot of fluff for a film that has no substance below it – if not actively engaging in mocking what little substance it has.

For those looking for a different film tone from Liu Chia-Liang that embraces the slapstick humor that was actively gaining popularity in Hong Kong in the early 80s, than perhaps Cat vs. Rat will not be so bad. It has its charms in the silliness and a few of the smaller roles are solid. Props go to Lau Kar-Wing for being perhaps the funniest part of the movie as their frustrated teacher. However, even then, Liu Chia-Liang hit bigger strides in grounding this style in Return to the 36th Chamber or the wink-wink love story of Heroes of the East than he does here. Cat vs. Rat is a film mostly for those obsessed with Shaw Brothers more than anyone else. Take it with a grain of salt and the film will be fun, but it's hardly anything more than that.