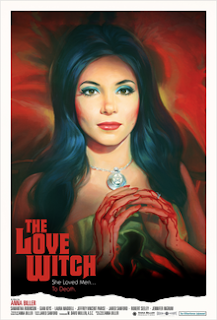 Elaine (Robinson) is ready for a change. Since her ex-husband left her, she has embraced her role as a “love witch” meant to embrace and understand the deeper meanings of love using magic, potions, and her coven to guide her. She moves to a new town to focus on this and quickly she finds that her powers might be too powerful as she starts to make enemies from those around her.

The Love Witch handles itself in a rather expertly crafted manner. It uses its first fifteen or twenty minutes to really set up the gimmick, a 60s Techicolor recreation of a world that’s not quite like ours anymore in style. Director Anna Biller handles the visuals with pizzazz, embracing these bright color schemes, psychedelic 60s approaches to the “witchcraft” in the film, and even recreating camera shots, moves, and performances that harken back to that era. This can be a turn off for those perhaps unfamiliar by its over the top and melodramatic performances from the cast or the almost relentlessly bright tones that wage war on logical and realistic looks that we associate with the world, but for those that are familiar with that time frame in cinema and culture it’s a strangely effective gimmick that gives the film an other-worldly feeling in robust fashion.


My worries for The Love Witch were that it would rely far too heavily on gimmick to sell its sensual thriller motives overall, but this is not the case with the film. While it might occasionally be a bit heavy handed in painting character motivations or using broad stokes with initial introductions to themes at first, as the film plays on the nuances of its subject matter and smaller tidbits of character development seep through the colors and style to reveal a film that’s much more in tune with its themes about love, sex, and gender roles than the surface level would indicate. The tone is rarely as thrilling or horrific as being a horror thriller would indicate, but it’s remarkably effective in blurring the lines between perceived character traits and the messages of its writing. This isn’t a film solely about a killer witch. This is also a subtle character study. A strong performance that digs deeper than the melodramatic beats make Samantha Robinson feel at home in the role as both the protagonist and antagonist to its wonderfully effective feminist concepts and it allows the film to expand beyond its niche genre exploitations. Biller handles it all while maintaining the style (who knew that a Renaissance festival could be layered in so many effective ways?) and never loses sight of the momentum it garners as it goes revealing a much more artistic narrative by the time the final credits roll.

It's true that perhaps the artistic cinephile crowd might be turned off by the sensual thriller exploitative elements of the film and the fans of the genre might be disappointed by the lacking “thrills n’ kills” as a horror tinged thriller, but truly The Love Witch is a film that balances the two in remarkable ways to craft a deeper exploration of feminism and characters obsessed with love. This is not a case of style over substance and more of film where the style is part of the substance. For a film that could easily be shoved into niche hole and overlooked by critics and fans, this is why you should uncover The Love Witch and enjoy it for being much smarter and sleeker than its trailers or concept would indicate. A brilliant cinematic gem for the year.