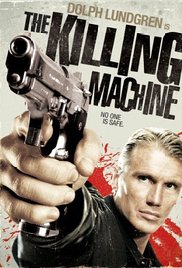 Ed (Lundgren) lives a double life. As an ex-KGB agent, his only way to make a living in the US was to work as a hitman for the Russian mafia, but he also has attempted to leave that life behind with a family and a decent job. When things go awry and he finds his name on the list to be taken out, he must protect his family and uncover the person who wants finish him off.

The Killing Machine is about as predictable as it gets when it comes to its basic plotting. A hitman with a heart finds himself on the wrong end of a contract, he can’t trust anyone, and his family is now in danger because of his past. Yawn. Been there, done that. This is action movie 101 when it comes to the plot. It tries to throw a few curve balls with some mysterious folks who may or may not be bad guys or good guys, but now that I have thousands of action films consumed by this time then this is formulaic. The key to why this film is so surprising does not lie in its unambitious plotting, but in its approach to that formula. The film is played with a lot of heart itself, giving itself a slightly neo-noir tone with some voice over work from Dolph’s lead character Ed, and it is a strong blend of modern and classic action that comes off as ambitious for a film of this budget. The action is strong, but there is quite a bit of chemistry between Ed and his family that grounds a lot of it with dramatic heft that usually falls flat in the genre. We’re not talking Oscar worthy material in the dialogue or performances, but there is a surprising quality that hits a lot of the right notes to develop a foundation to build the rest of the film on. That is a huge bonus.

As I mentioned in the opening, Dolph Lundgren also serves as the film’s director and his approach elevates the material too. The film is shot in the tone of a more modern action film, at times sparking a resemblance to modern Michael Mann with its gritty tones and handheld appearance. It does not suffer from the kinetic ultra-cutting that usually goes with the territory, thank God, which does give the film a bit of an old school approach to its action than the choppiness that’s popular right now and Dolph frames the action well to keep the energy of the film moving. He does have a tendency to use a bit too much of the blurred slow motion in the film for flashbacks and one key action sequence to give the film a hazy dream-like quality that doesn’t work nearly as well as it might have with a larger budget, but considering its blend of old and new it’s a minor issue for the overall quality of his direction.

Of course, what everyone really wants to know about when reading a review for a film like The Killing Machine is whether or not the action is entertaining and, quite frankly, it is. In a classic old school American manner, the film is a blend of gun battles and fist-to-cuffs, allowing Dolph to showcase his classic snarl and massive size in a variety of settings and the Michael Mann approach to the gritty noir look blends with it quite well. It’s not nearly as cheesy as one tends to expect from a Dolph Lundgren film with only one moment at the end that strikes that wink-wink attitude that tends to bring laughter and cheers from action fans, but when the quality is good it doesn’t deter from the entertainment value of the action itself.

The Killing Machine is impressive for a later era Dolph film. While he does have a variety of gems in his filmography since the 00s, this one is perhaps one of my favorites with its blend of modern and classic action staples and an eye to ground the clichés with a decent amount of chemistry and heart. It can be predictable at times with the plotting and it has a few hindrances in the stylistic choices that undermine a bit of the momentum it develops, but overall The Killing Machine is a fun and oddly artistic film worth seeing. If you’re an action fan or a Dolph fan than it’s a must own though.