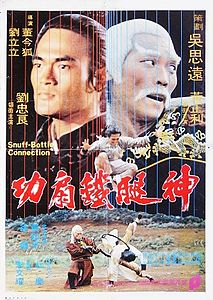 The Russians are coming. Lead by Colonel Tolstoy (Roy Horan) and using General Shantung (Hwang Jang-Lee) as cover, they are looking to start an invasion of China. It’s up to Shao Ting Shang (John Liu) and his friend Kao (Tip Fei-Yang) to stop them though, but the price may cost them their lives to pull it off.

Snuff Bottle Connection is not the kind of kung fu flick that is meant to push boundaries in much of any way, not like some of the other films of the era that were beginning to evolve with the times, but it’s one that is able to take all of its many clichés and wrap it in a solid package. The execution is strong enough that it can run with the predicable nature of its plot and character arcs. In many ways, the film doesn’t even try to hide its intent. Right from the beginning we are told about the Russian plans to invade China in the film and that there is a traitor in the midst. When Hwang Jang-Lee shows up, it’s pretty obvious who that is going to be and the film does not try to trick its audience with a mystery about the traitor. As far as plot goes, it’s about as straight forward as it gets. A hero hired by the government to sniff out the traitor and investigate the Russians (who, for the record, are hilariously dubbed with the worst Russian accents I might have ever heard) and he teams up with his “thief gambler with a heart of gold” friend to uncover the plot. The rest is muscle memory for a kung fu flick.

However, it’s the impeccable casting and great execution that really does carry Snuff Bottle Connection. While I am not particularly knowledgeable about either of the two credited directors, Lily Lau or Richard Tung Chin-Hu, they handle the dramatic pieces well and give weight to the performances from the leads and their bouncy kid side kick (whom I just saw in another charming performance from Sleeping Fist). The cast holds their own, although Tip Fei-Yang is given a strong arc with his kid side kick that overshadows John Liu a smidgen, and they ably navigate many of the scenes even if the dubbing detracts a bit from their performances. The film moves briskly enough and it never drags even when they start throwing in more twists into the plot in the latter part of the second act and it makes for an entertaining film overall.

The biggest benefit to Snuff Bottle Connection though is the combination of the cast with fight choreographer and action director Yuen Woo Ping. The fights are dynamic, fun, and still emotionally charged enough to progress the tone, plot, and characters. Each fight has its own spin in the film, leading to a great finale that sees John Liu in a kick-off with Hwang Jang Lee (two of the best kick artists in the genre) and a fun little duel between the Russian’s pistols and Kao’s throwing daggers. Kung fu fans are going to have a blast with the action in this film and it parallels a lot of the plot and character work in a wonderful manner.

In the end, having to watch Snuff Bottle Connection in such a poorly kept format does hinder the overall experience. The film is a great and overlooked kung fu flick that deserves more than the tracking problems and fuzzy expressions that my flawed copy shows. It’s fun, entertaining, and remarkably heartfelt in its execution. Fans of the genre will probably just have to suffer with the shitty presentation of the film though. Still, it gets a huge recommendation from Blood Brothers as one to seek out and support.