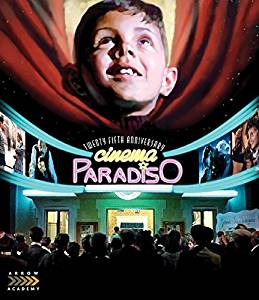 Salvatore (Perrin) has been stricken with some hard news. A father figure from his past, Alfredo (Noiret), has passed away. Salvatore is a famous film maker now, but his roots go back to an old local cinema in a small Italian town called Cinema Paradiso where Alfredo helped him in his love of movies. He starts to remember the past and why he left before he heads to the funeral.

Often cited with drawing focus back to Italian cinema with its worldwide success in the late 80s and early 90s, Cinema Paradiso is one of those films that works on a variety of levels and it’s easy to see why it earned many of the accolades that it did. The film is an emotional roller coaster ride and it’s immaculately performed by its cast. It is essentially split into three acts, each one corresponding with a different age of its lead character Salvatore with the first two acts told in flashback to his interactions with the locals of the town and how both cinema and the father figure Alfredo became so important to him. In a way, Cinema Paradiso could have been three films as each act represents a different aspect of one character’s life journey. The first act is a sort of coming of age tale, the second act is one about romance and destiny, and the third is one about analysis and the lessons learned in a life lived and whether it was to its fullest or not. Occasionally, the film can stagger a bit in how expansive this concept is, having to rush a bit of the third act and drag the second act out with its romantic subplot, but the intent is certainly justified and it ultimately works. The emotions connect with the audience, on a variety of levels with its various approaches, and that is the most important aspect to why this film works.

Cinema Paradiso is really driven by its performances though. While the various performers that act as Salvatore in different ages, highlighted by a great and super charming performance from the youngest version played by Salvatore Cascio, are all great, this film is defined by the heart that Philippe Noiret brings to the table as Alfredo. He drives home many of the messages as the true protagonist of the film’s intentions and the performance simply delivers on all fronts. Cinema Paradiso is littered with amazing performances, but it’s his appearance and work in this film that lifts it above the high regards it receives. Director Giuseppe Tornatore realizes this and creates a defined and organic relationship between this father figure and the young Salvatore throughout the first two acts so well that his character and performance even effects the final act when he is not present. That’s the strength of the core of this film.

As a bonus, this Arrow Academy release does contain both versions of the film, the theatrical two hour cut and the almost three hour director’s cut. While the theatrical cut left some unanswered questions in its third act, the director’s cut does improve on it by adding in a substantial wrap around plot line from the second act that finishes it off and adds a new parallel to the meaning of the final moments of the film as Salvatore watches the final film reel that Alfredo made for him. Not to give too much away from the plotting or character developments, but give the longer director’s cut the chance it deserves as it improves on the overall thematic layering that the theatrical cut was lacking a bit in the final act.

Cinema Paradiso may not be a perfect film with some of its epic intent and decades spanning storytelling that can be a lot to consume all at once, but it’s a film that does linger after the credits have rolled as a love letter to post-war cinema and the lives of those that dedicate their time to telling us stories. It’s a layered character study and it’s powered by heartfelt intent that is perfectly expressed by performances, enhanced by a director with a vision, and punctuated with a phenomenal score by Morricone for a strong emotional ride. For one of Arrow Academy’s first US releases in March, one cannot get a better kick off than Cinema Paradiso as a dominant arthouse piece of cinema worthy of mention. This comes with the highest recommendation.