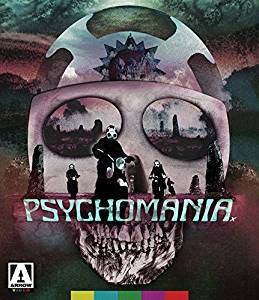 Tom (Henson) is quite simply a wild child. Coming from a rich family complete with medium mother (Reid) and their all knowing butler (Sanders), Tom spends most of his days riding around with his girlfriend Abby (Larkin) and their motorcycle gang The Living Dead. When Tom finds out that he can survive death and never be hurt or die again once he comes back, he kicks off a series of events that will leave their town in shock and a slew of bodies in his wake.

There is a kind of ambitiousness to Psychomania that elevates the material. As the film starts, it presents the audience with the standard kind of biker flick drama using the cliché ‘young gone wild’ of that era as a foundation to establish the gang. It’s not particularly ambitious in this area as Tom is the rebellious boyfriend, his girlfriend Abby is the one that truly drives the narrative as the character that connects with the audience the most, the rival girl who is more akin to the leader in personality and constitutes a rival, and there is a hodge podge of throw away secondary cast. However, the execution of its cast is better than expected with both Henson and Larkin delivering some fun romantic teen drama and decent onscreen presence. This bleeds into the supernatural elements of its plot, which do blend the ideas of youth running against authority or the establishment nicely as Tom and the gang decide to fight back against death itself, and for the most part Psychomania balances its themes nicely as it runs through hints of psychedelic tone and a classic horror feel. Director Sharp coats the film in a nice gothic tone that gives it a fun feel, particularly when partnered with the awesome psychedelic score, and for this I found the film quite entertaining and unusually smart in a lot of ways.

Most of the problems arise from where Psychomania pulls away from going further with its themes and characters. In an attempt to be more entertaining or action packed, the film tends to meander off the path and throws in a subtle use of dark humor to try to make it work. There are action scenes that don’t necessarily go with the tone which includes an entire portion of the second act where the various gang members are killing themselves to submit to the “undead” ritual that includes one guy who leaps into a river with cartoonishly large locks and chains to drown himself and another leaps out of a plane with no parachute. The film is weird, certainly, and I would be speechless to try and explain the use of frogs or what the “hidden room” that divulges the information to Tom about how to beat death that’s left intentionally vague, but the narrative flow doesn’t always benefit from it. There are moments where it seems to work, including a dream sequence for Abby that is oddly unsettling with its use of dark humor, but it can be distracting from the overall themes that are pushed to the wayside for these moments.

Still, Psychomania is a rather shockingly fun film that rises above the expectations I had going into it. The new Arrow Video release is packed with special features (listed below) and it shows in the love that there is out there for the weird quirks and oddly satisfying themes that this film touches on as it smashes two beloved cult genres together. Go in with the right expectations for a film with subtle dark humor, psychedelic touches of gothic atmosphere, and loads of youth gone wild biker mischief and you will have a blast with Psychomania. This is a film one will want to revisit again and again just for the oddities of its plot and charismatic presence of its loaded cast.