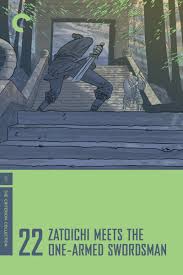 As the end of the Zatoichi franchise comes near, it’s obvious that the filmmakers and producers were running out of ideas to make the films unique. I mean, this is the 22nd film in the series after all. It’s understandable. So they obviously turned to gimmicks and tricks to keep things fresh. The results have been something of a roller coaster ride of quality for the films and the previous entry, Zatoichi Goes to the Fire Festival, was a big eclectic and entertaining mess. However, the series seemed intent on bringing in the new fresh elements and for this next entry our blind heroic swordsman is destined to meet blades with one of China’s legendary martial artists– Wang Kang, the one armed swordsman played by the iconic Jimmy Wang Yu. While it’s not quite as soul devouring as the last time Zatoichi met with another franchise character in Zatoichi Meets Yojimbo, Zatoichi Meets the One-Armed Swordsman is still a massively entertaining and fast paced flick worthy of this high end franchise.

Wang Kang (Jimmy Wang Yu) is in Japan to visit an old friend who has returned to study at a temple. When he befriends another Chinese couple with a young son, he forges a quick bond. Unfortunately, a mistake by the young boy leaves his parents dead and Wang Kang on the run from the local authorities. When Zatoichi (Shintaro Katsu) gets involved in a desperate attempt to help, things only turn for the worse and the two legendary swordsmen will find themselves destined to drawn blades on one another by the end of this adventure.

What I enjoyed best about Zatoichi Meets the One-Armed Swordsman is that it is a return to form for the series by having Zatoichi be (more or less) a victim of circumstance again. He essentially has no part in the events that kick off this adventure and continually throughout the film there is a theme of assumption and miscommunication that only exasperates the growing tension and violence around the two heroes. It’s a strong and emotionally effective theme that only gathers momentum as the film continues and it consumes a plethora of characters as it snowballs. The viewer begins to feel somewhat bad for both of the heroes as they continually find themselves swimming against the current to ‘do the right thing’ and it makes the film a riveting and invested watch for its audience. It also allows the film to navigate a narrative that seems straight forward on the surface, but is remarkably dense and subtle in its execution. Whether it’s the strong slew of secondary characters or the moments where we see a new problem gestating for our heroes, the film knocks it out of the park as it unfolds – slowly – but very meticulously.

Of course, the film is easily made better by the performances of both Shintaro Katsu and Jimmy Wang Yu. Both gentleman have carried the films of their franchises with their screen presence and swift charming portrayals. It’s fairly unfortunate that, as a Zatoichi film, Wang Kang’s character gets a slightly less dynamic character arc and the film doesn’t nearly capture what made him so fascinating in his own films. They throw in a few things here in there to showcase the wuxia style of his “mythos” by his ability to leap into tall trees and his staunch respect and intensity towards retaining honor, but it comes off as too little to really build the interesting combination that having a wuxia hero in a chanbara film could have crafted. It leads to some fun and clever fight sequences (although I would be lying if I said that I was somewhat disappointed by the short length of the final duel as it feels more like a Japanese action sequence rather than a Hong Kong one) and the humor works spot on, but there could have been even more fun then what the film uses.

All in all, Zatoichi Meets the One Armed Swordsman is still a fun and well executed flick. It doesn’t quite grasp the great wuxia elements that Wang Kang’s character could have brought to the table, but it wholly works as a Zatoichi flick. The performances are spot on and the visuals are strong enough to sell a lot of the plot heavy twists and turns that the film takes. It’s certainly not a perfect film, but this is one that has a lot of replay ability as I head towards the finish line of this franchise. Fans will love this one, even if it could have been slightly better.