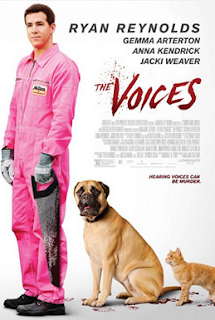 Horror comedies are easily one of my most loved and most hated genres of films. Like most comedies, it’s highly susceptible to “taste” and too often they will sacrifice the horror elements, story, or characters for the sake of a gag. For The Voices though, the balance is damn near perfect. The film is still decently situated in the horror genre, fringing on the serial killer plot, but the injection of dark humor is impressively placed and the execution overall is of a very high caliber. Not only does it make it one of the best horror comedies of the year, but likely one that will remain a cult favorite for decades to come in its strong sense of direction and execution.

Jerry (Reynolds) really wants to be liked at his job. He's had some issues in the past, but he's working through them with the help of some medication and his sweet therapist. However, he's fallen for a woman at his work (Arterton) and he wants to make an impression. So he turns to his two pets for some advice. Sometimes love can be the one thing that sends a person out of control though....

Firstly, it has to be stated that The Voices is approached in a very artful manner. It’s not very often that a horror comedy can be called ‘artful’ so I want you to take that statement and put it in your pocket. I won't say it very often and you’re not going to hear it very often. Director Marjane Satrapi takes the rather by the numbers horror concept, a mentally ill young man who hears voices and starts to spiral nightmarishly out of control, and gives it a thoughtfulness and charm that would have come off as silly or distasteful in lesser hands. Whether it’s the color pallete of the film's visuals, the edge into satire about work and social roles that people have to play into, or the endearing connection that the audience makes with our protagonist, The Voices layers on a lot of material. In one moment the film can be shocking (the first kill sequence) and in the next hilarious (the head of his first kill speaking to him from the fridge). The Voices just navigates the fine line so well that the audience sinks right into the groove of what the film has going for it and nothing feels out of place in the context. Except for maybe the very, very end – which I enjoyed, but I can see some people feeling it comes out of left field at a pretty sharp angle. However, that's besides the point.


Powered by a phenomenal performance from Ryan Reynolds, the film is remarkably both hilarious and heartbreaking at the same time. There is most certainly horror elements and the film doesn’t shy away from the violence of its concept, but rarely does Reynolds come off as a horrifying villain of the film. In many ways, he’s as much of a victim as his victims in the film and the way that The Voices handles the issue of mental illness is rather impressive. After a film handled the same issue so poorly earlier this year (the interesting but ill executed Enter the Dangerous Mind), it’s nice to see a horror film that can find the humor, sadness, and sincerity without coming off as too gimmicky or in poor taste. Particularly when it includes a talking dog and cat that act as two extremes of thinking which only adds to the layers instead of distracting from them.

Occasionally The Voices does feel a bit rushed, a blooming romance between our lead and one of the office girls, played with remarkable charm by Anna Kendrick, could have used a bit more time to develop for an ever greater impact of how it ends, but overall the film is paced impeccably too. It flows with a lot of ease as the audience rides along and the shifts in tone are done with a finesse that is too often lost in horror comedies. The ending can be a bit sudden too, but it’s merely a footnote of critique in a film deserving of praise.

As you can tell, I essentially have nothing bad to say about The Voices. It’s easily one of the best horror comedies this year, if not in the last decade, as the balance of the three h’s (horror, humor, and heart) is impressively executed by all elements of the film. It might not be quite horrific enough for some or the usual brand of offensive, slapstick humor that Ryan Reynold’s fans would expect, but it’s well worth the time to experience.