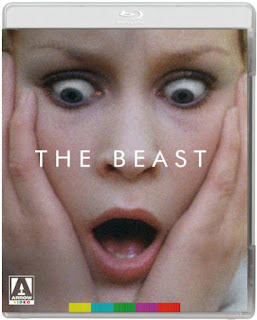 Normally, Blood Brothers doesn’t combine films into one review (I think Kill Bill is the only other one I’ve personally written), but when it comes to The Beast and Immoral Tales – we’re going to make an exception. Mostly because the films, in their essence, are of the same ilk. Similar themes, similar style, etc. and I don’t want to have to repeat myself on a lot of the same things right in a row for our readers. The films themselves are of a unique breed: films that can easily be swapped between arthouse and soft core pornography. If that sounds like a strange combination, don’t worry – it is, but it was a style that was not only fairly common in the cult markets of Europe in the 70s, but worldwide. The problem with The Beast and Immoral Tales is that too often it’s either horrendously boring in its arthouse elements or abrasive in its breaking of conventions (usually of the sexual kind) and it just doesn’t work nearly as well as expectations lead me to believe.

In The Beast, a young woman Lucy is set to be married off to a young French aristocrat but the two seem to have no interest in one another. After hearing a story about a woman’s affair with a beast from the woods, she begins to imagine how things might be different. In Immoral Tales, four tales interweave to parallel one another about the issues that plague people whether it’s teenagers from the present or Bathory from the past.

Truthfully, my only other experience with director Walerian Borowczyk is the erotic slasher The Strange Case of Dr. Jekyll and Miss Osbourne that was previously released by Arrow Video this year. While that film certainly had its merits (you can read my review for that HERE), Arrow Video seemed intent on bringing more of the director’s films to the US in new (and extremely packed with features) releases. Curiosity sure got me on these as there seemed to be a fairly dedicated arthouse cult audience that praised these films for their shocking tactics and stylistic visuals. However, both films tend to fall prey to the same fatal flaw: style does not equal substance. You can read into the films all you want on how Borowczyk will intercut a scene of oral sex between two people with seagulls over the sea or the fairly obvious attempts at creating a parallel of sexual beasts that are not all that different from plotting family who want to sell you off to marriage, but in the end the films remain astonishingly vague. The films both retain this sort of minimalist approach to narrative and allow Borowczyk's visual style to be the primary story teller which retains a soft and dream like approach to the matter that seems to be his calling card. Unfortunately, the stories and the social commentary are just too vague to allow his visual style to carry the films.

Perhaps it’s the fact that in 2015 the shock of extensively erotic sequences have lost their effect or that Borowczyk seems intent on making his scripts as vague as possible with nap inducing dialogue, but neither film seems to carry enough oomph to actual make the impact that so many arthouse reviewers give the two films props for. It doesn’t matter how effective the performances or visuals are when the film seems intent on focusing on the two extreme ends of foundational elements. The films might grow on me with some time to digest what Borowczyk is offering, but at this point the two films seem disjointed in their presentation.

However, if you are into the French erotic and the dramatic beats of early Borowczyk then you are certain to love what Arrow Video has to offer on these packed releases. Both films have some intense and massively informative interviews and some extensive essay work on why Borowczyk is such an influential cult director. Immoral Tales has two versions of the feature, the traditional four story one and one that includes a fifth short film that would actually become the other film The Beast just a year later. The Beast as a film contains a ton of bonus material including commercials filmed by Borowczyk and a fascinating visual essay that talks about the sequel to The Beast that never came to be - which is sure to excite fans.

While neither film struck a chord with me as films with their niche genre and vague foundations, there are certainly folks out there that seem to love the stylistic visuals and social commentary that the director injects into his films. If you are one of those that are curious about what either The Beast or Immoral Tales have to offer as arthouse erotica then you really can’t go wrong with the depth of material that Arrow Video packs onto these two releases. Seriously, I was far more captivated by the history and analysis of the films than the films themselves – it’s that effective.