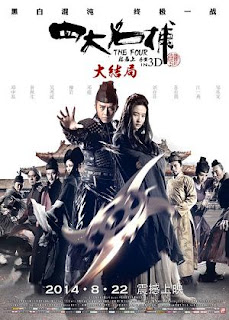 One of my biggest pet peeves with modern film making is the weird focus on splitting films into two-parts. My issues arises with the fact that too often the film makers don’t worry about each entry being able to sit on its own merit as a film. When it came to The Four II, also known as Lawless Kingdom for its US release, it sat on its own surprisingly well – despite the fact that it left a lot of aspects hanging for this third part of the trilogy. However, The Four III (also known as Kingdom of Blood for its US release) does not fare quite so well. Instead of being the epic finale that was teased by its alternate subtitle (The Final Battle), the film tends to spend a lot of time running to tie up loose ends and give some of the characters the ending their arcs desperately needed. The film still remains entertaining, but it’s not quite as effective as it might have been.

With The Four now essentially going their separate ways after the truth of Emotionless’ (Liu Yifei) past comes to light, the plans of the evil Lord An is free to continue his plot. After an attempt at assassinating the Emperor is thwarted and he ends up in the hands of the Divine Constabulary, Coldblood (Deng Chao), who is now working with Department Six again, will have to figure out just who the traitors are within the government. He’s going to need his old team to uncover just what Lord An has planned.

The Four III had a tough task. The previous film spent a lot of time teasing a much bigger plot and it continued to deliver some great character twists that would actually see our titular heroes split up and go their separate ways. Not only does The Four III have to continue to unveil even more larger plotting, but it now had to somehow get our heroes back together, tie up the character arcs, and still deliver an epic finish to a series with a decently devoted following. It’s a monstrous task and, despite a few stumbles on the way, it delivers what it can. Unfortunately, it only has time and momentum to do so much and the results are a bit more mixed than the last couple of films.

The Four III has to focus on a few characters to deliver the emotional beats for the film as a whole (namely Coldblood and Emotionless) and the rest – more or less – are left to fend for themselves with less screen time. For some it works, Anthong Wong’s teacher character actually gets a remarkably effective finish for having almost no screen time in the film, and for others it doesn’t seem quite as effective. The plot revolves around a failed assassination plot on the Emperor and how Lord An plans to use that  as leverage to overtake the government (simple enough world domination plot), but the addition of the Emperor as a character with his arc certainly detracts from some of the other characters we have already invested in. Lord An’s son (the tree guy) is given a super weak finale and his addition to the story seems forced as it never finds a purpose through any of the films. Had he been edited from the film, I’m not so sure it would have changed a whole lot. This is just one of the few ways that The Four III can’t live up to the set ups from the previous two films. There are too many characters with the audience invested in them to properly give them all the sendoff they deserved. It’s remarkable how much that the film pulls off, so it’s impressive in some ways, but it had an essentially impossible task.

Due to the film’s intent on giving as many characters the arc finishes they deserve, it actually hinders how epic the film might have been plot wise. With an Emperor assassination, a government upheaval, and a villain as ridiculously awesome as the power devouring Lord An is, The Four III almost needed to be more epic to pull it off. Yet, like I mentioned above, it simply doesn’t have enough time to set up “the final battle.” So a lot of the action of the film is pulled back to having our heroes survive various traps instead of full on epic action set pieces. Even the villainous Lord An doesn’t get nearly enough time on screen. Nonetheless, The Four III does pull off some great old school style in this regard though and the finale, where The Divine Constabulary must face off against Lord An and his personal guards, has a great classic wuxia feel to how its shot and the themes it presents. The action is solid, it’s just not quite as epic as one would expect.

Director Gordon Chan obviously shoots the film with a lot of heart and he has a great knack for blending real world emotions, plotting, and fantasy elements into one film. It’s just unfortunate that the expectations and set up for The Four III were so high that there was no way it was going to be able to pull it off. Like the rest of the series, the visuals are fun and fantastical, the performances are strong, and the action is creative and energetic. However, there is just not enough time to pull off all of the character work and plotting that was needed for it to feel like the trilogy end that was needed. Still, the film is highly entertaining, the action is effective, and what plot and character material that is given the time works effectively. It doesn’t hold on its own quite as well The Four II did though so it does feel like a step down. When watched back to back with the second film, it’s better…but it’s hard not to be somewhat disappointed on some level.