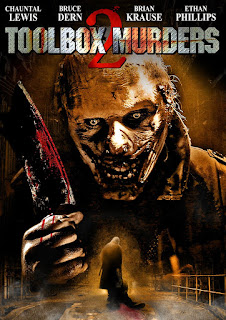 Tobe Hooper’s 2003 re-imaging of the 1973 grindhouse classic “The Toolbox Murders” was a minor underground success that momentarily put Hooper back on track as a horror director to keep an eye out for (though he would later derail his career again as expected). Though I enjoyed it, “Toolbox Murders” was a flawed slasher flick that despite its rushed, open ending really didn’t beckon for, or deserve, a sequel. It served its purpose as an enjoyable hour and half for slasher fans but this genre is littered with sequels and we all knew one was not far behind. What we didn’t know was the production hell and behind-the-camera drama that would ensue that would delay the official release of this follow-up for more than a decade. Now after a few title changes and the director and producers putting their differences aside, Shout! Factory unleashes this cursed sequel to the masses and it comes to no surprise it was not worth the wait. 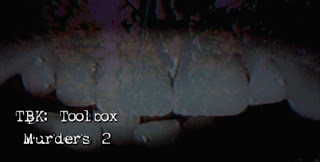 The killer from the original (now credited as TBK in the credits instead of Coffin Baby) survives his fall, decides to kidnap the sister of the survivor of the original (how the hell did he know where she lived?), takes her back to his lair and tortures her for a majority of the films running time with annoying “time passing” title cards that popup every five minutes. 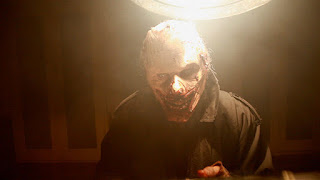 Fans will notice right away that barely any cast or crew names from Hooper’s version return. Director Dean Jones was the special make-up effects artist on the previous film and the man behind the make-up returns as our grisly faced killer. Other than that everything else is different, even the damn tone of the film. For the past 10 years there has been an emergence of films that focus on pain, gore and torture that began with a little film called “Saw”. Don’t get me wrong as I do like many of the films in this relatively new horror film movement but it has produced many third rate knock-offs which is what “Toolbox Murders 2” essentially is. This is the result if mockbuster production company The Asylum decided to make their own “Saw” film – it’s that bad.

With any of these torture films, the film is only strong as your players and if the actors can’t realistically portray their pain and agony then the film will fail, which “Toolbox Murders 2” ultimately does as our lead actress Chauntal Lewis can’t convincingly convey her emotional and physical abuse. Here character is also all over the map, from strong willed to a whimpering willow. We are even graced with legendary actor Bruce Dern giving a cameo but he is thoroughly wasted in his supernatural twist of a subplot. 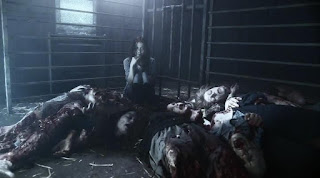 What we also have here is another “franchise” where the filmmakers fall in love with their villain. Unlike Freddy, Jason, hell even Jigsaw of the “Saw” franchise, Coffin Baby (err.. I mean TBK) just isn’t interesting enough to carry a film. The first film tried to create an aura of mystery around him with some occult surrounds in the building he terrorized but all that is thrown out the window for blood, pain and torture and all the supernatural elements feel shoehorned in. With no plot, an uninteresting villain, ham-fisted acting and directing that barely ekes above amateurish we are left with a hollow, uninteresting waste of a film. Quite frankly I was bored throughout. 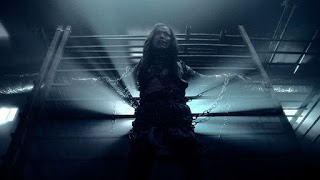 Far more interesting than the film is the troubled backstory. It seems soon after completion the director went and shot additional footage, cutting all ties to Hooper’s film and released it under the title Coffin Baby (Image Entertainment even released it on DVD in 2013 under this title but good luck finding it now). Legal battles ensued until the director and producers put their differences aside and the new footage was scrapped and the version Shout! Factory released on DVD and Blu-ray is the original vision as devised in the script. I have not seen the “Coffin Baby” cut of the film but if this is considered the “definitive cut” it’s hard to believe how unbelievably bad that version has to be but fans on facebook do ensure me that cut is better... perhaps I will find out for myself one day.

Posted by Cronosmantas
Email ThisBlogThis!Share to TwitterShare to FacebookShare to Pinterest
Labels: Horror