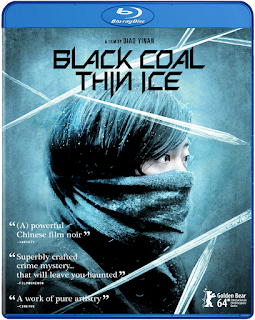 Black Coal, Thin Ice received a fair share of awards and nominations from various film festivals and award shows. This brings certain high expectations of the film that can be hard to obtain. Luckily, Black Coal, Thin Ice lives up to most of those high expectations with its artful approach to the modern noir style film. It’s not a film for everyone with its intensely drab approach to its subject matter and less than forthcoming script about details, but it’s executed in such a transfixing way that it left a fairly impressive impact on me. An impact that lingers long after the credits have finished rolling at the end.

Zhang Zili (Fan Liao) was forced to retire after an incident left him seriously injured and a few fellow police offers dead. He was investigating a series of dismembered body parts found in various coal facilities when the incident occurred. Five years later though, another series of murders comes to his attention that follow the same pattern…and this leads him to a mysterious woman (Lun Mei Gwei) who seems to have a shocking connection to the victims.

On the surface, Black Coal, Thin Ice would seem to have the neo-noir concept down to perfection. The disgraced hero, the ‘is she or isn’t she the villain’ female lead, and a murder mystery that seems to warp all of the events around the various protagonists of the film. However, director Yi’nan Diao is most obviously intent on not playing into the mainstream thriller aspects that many neo noir films tend to cater to nowadays. He unravels the film in a low-key, highly atmospheric approach that slathers on subtlety instead of thrills and grates the film on an almost surrealistic realism. The results? A rather cold and bleak film that rarely buys into its own formulas. It’s an intentional and almost apathetic approach that gives the film a very gritty tone without sacrificing its great visual designs. Even scenes where emotions should run high, like an early shootout or the romantic subplot for our main hero, are shot with a very straightforward and less than emotive tone. It’s simply a dark film, no matter what the outcome of the actual plot and it makes Black Coal, Thin Ice one of the most unique neo-noir films I have seen in a long time.

Black Coal, Thin Ice can be a little too off kilter in its execution though. The film tends to be too subtle in its character building and a little too artsy with its structure. The plot plays out like a fairly standard mystery as we are given clues and twists along the way to complicate what should have been a fairly straightforward thriller. Yet it seems to reach its natural climax and progression about two-thirds of the way through the film. Not to give too much away, but by half way through the film we already know who the killer is and by the two-thirds mark we already know how and why the killer does what they do. From there, most of the third act is just wrapping up some of the character arcs and getting a final jab or two in for the audience. It leaves the film feeling even bleaker and more nihilistic with how it wraps things up – so don’t go expecting any kind of “happy” ending in the traditional sense. Particularly when most, if not all, of the characters are built in a very gritty and realistic sense.

If there was an even bigger surprise than the general cold tone of the film, it’s the strange humor that seems to randomly pop up throughout. The film is cold and dispirited in its narrative, but there is a handful of hilariously dark scenes where the timing and strange breaks make for some great comedic efforts. Not that some of these are intentional or at least they won’t be funny for some, but it was a pleasant surprise overall to see some of the wicked effective humorous pieces that arose from such a dark and gritty flick.

Black Coal, Thin Ice is simply a film that defies expectations. It’s expertly crafted with a handful of phenomenal performances to carry the heavy visuals and often perplexing narrative, but it’s going to be a film that the average mainstream film watcher isn’t going to love. If you are willing to dive into the atmospheric drive of the film and let yourself be consumed by its gloom n’ doom kind of tone then it’s going to work in spades. Go in with the right mind set and you’re likely to find one of the better gems of the underground releases this year. Just be wary because Black Coal, Thin Ice is not a film for everyone.