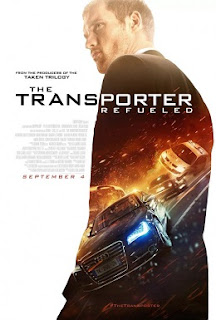 I sincerely love the first two Transporter films. Warts and all. The series was anchored by a screen devouring presence by Statham, fantastic action work from Hong Kong legend Corey Yuen, and it took its B-grade action concept and slathered it in fun. It wasn’t until the terrible direction and editing of Transporter 3 that I sincerely lost hope for the franchise – despite the fact that Statham and Yuen were both involved in that one. For the latest entry, a reboot of sorts called The Transporter Refueled, the series ditches ALL of the above and then decides that the editor from the third film would make a great director. Needless to say, the results are not nearly as positive as I’m sure the film makers would have hoped.

Frank (Skrein) is getting his footing down as an elite transporter...no matter the package. When his dad (Stevenson) shows up to visit and celebrate his retirement, he is kidnapped as ransom in Frank’s latest job. Now he’s going to have to help four desperate women complete a series of tasks on some Russian mobsters if he is ever going to see his father alive again.

There are some serious issues that arise in Refueled. There are a lot of fun ideas in play here as a B-action flick, but a lot of the scenes are either pulled directly from previous films (the thugs stealing his car, the idea of being coerced into helping some bad guys, and even a silly jet ski chase) or they are butchered by the film’s incohesive narrative and/or poor choices by the director. The father and son dynamic is a poor man’s reworking of Indiana Jones and the Last Crusade in many ways – including how his dad calls him Junior – and the fun idea that the villain of the film was an old military friend could have been fleshed out into some thoughtful beats, but isn’t. It’s as if this film had a surprising amount of ideas embedded into a film that just couldn’t give two shits about them. It’s frustrating to watch as it pisses a lot of potential away.

On top of its failed abilities to develop a narrative worth the audience’s time, Refueled also failed to entertain nearly as much as any of the previous entries. Ed Skrein is certainly no Jason Statham and his inability to anchor the film allows it to slip out from underneath him time and time again. He’s a solid actor with plenty of future roles to conquer, but he struggles as Frank Martin and this film is hinged on him knocking it out of the park. The femme fatale roles are slapped together with no real motivation and lack the emotional punch needed to work. Ray Stevenson is horribly underused as Frank’s father, Frank. In fact, he sort of awkwardly stumbles about the film – not at all inhabiting the badass spy he’s supposed to be, and his character is kidnapped not once, but fuckin’ twice in the time of the film. Real great spy, guys.

Yet, it’s the action that might be the biggest sucker punch of all and it just buries the film. Despite Megaton’s inept direction of Transporter 3, the film at least had Corey Yuen on board to do coordination and design. Refueled attempts to replicate the same outrageous Hong Kong action, but it sorely lacks inspirational design to sell it. A huge example is how a fight turns into a tight corridor with filing cabinets on both walls. It starts to get interesting for a minute and then the movie moves out of there for a more mundane space with less thrills. Yawn. It doesn’t help that director Delamarre (Megaton’s editor) is still obsessed with quick edits, random zooms, and horrendous shaky cam. It’s like watching what might have been a good action piece slaughtered in front of your eyes. Thanks, but no thanks.

If The Transporter Refueled was supposed to be the big reboot that they wanted, then it failed…and it failed hard. The film has nothing unique, charming, or well executed about it. It struggles at even being an entertaining B-action flick with its all too serious plot and lacking sense of direction. This franchise has slipped slowly downhill since the first film and this “new chapter” surely has to put the nail in the coffin. It’s not even fun. It’s just downright sad.