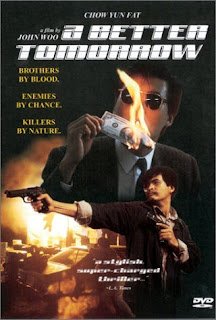 Looking back, ­­A Better Tomorrow was one of the key films that drove a young teenage version of myself towards cult cinema. It had some major impacts in my life, both as a driver of the kind of films I would come to prefer and as a staple of comparison for films to come. To this day, it still has a profound effect on me. I tear up in the final act. I buy potted plants and scatter them throughout my house in case I have to hide something in them. I even slam my leg on the table at bars, toast it, and pour my drink all over my pant leg. Sure, that last one might not be true, but I think about often when I am out socially. It does not deter from the fact that A Better Tomorrow was a game changer. Not only for my fifteen year old self, but as a film too. It took John Woo and Tsui Hark’s careers to the next level and it rocketed Chow Yun Fat onto a path of international stardom. It essentially made the term ‘heroic bloodshed’ its own genre. While some of the style might come off as cliché or even cheesy to audiences now, the film works perfectly and remains a forerunner to what modern action cinema is today.

Ho (Ti Lung) and his partner Mark (Chow Yun Fat) have been one of the leaders in running a black market scheme out of Hong Kong for quite some time. They are training a new recruit Shing (Waise Lee) when a deal in Taiwan goes horribly awry. This leaves Ho in prison for five years and when he gets out, he wants to take his life straight. His police officer brother (Leslie Cheung) doesn’t believe him, his partner Mark doesn’t understand, and a new crime boss seems to want him dead. There is still a lot of work to do to rectify his wrongs.

A Better Tomorrow is the kind of action film where the action, no matter how good, takes a back seat to the character work on display here. While Chow Yun Fat gets a lot of credit for this movie, more on that in a minute, and there is essentially three lead roles, the heart and soul of this movie rests with Ti Lung’s Ho. Shaking off some of the more stand up heroics of his time with the Shaw Brothers studio, he plays the perfect weathered and well-intentioned gangster here and it’s his emotional journey that lifts this film up. He is surrounded by some serious talent in the secondary cast and it’s easy to see why Chow Yun Fat comes off as the face of this film when he steals so many sequences. His hot headed and often desperate cool portrayal is the perfect balance to Ti Lung and Chow Yun Fat destroys what could have been a throw away “best friend” role. The chemistry on screen between the three leads is impeccable and it truly is the biggest reason to see A Better Tomorrow.

With that being said, the rest of the film is also top notch quality. John Woo takes his now patented “gun fu” style to dramatic heights here with some massive melodramatic scores and an ability to capture movement and depth like few of his Hong Kong action peers. As an action film, A Better Tomorrow is potent. It never shies away from the violence, a sequence where Chow Yun Fat pulls a one man assassination on a dinner party almost entirely in slow motion stands out, and it uses its character work and dramatic tension as a build to explosive bursts - bursts of gun fire, explosions, and horrific hand to hand fights that punctuate turning points in the plot. The style might be called ‘heroic bloodshed,’ but rarely does any of the action pieces feel heroic as much as a needed break from the building atmosphere. John Woo shoots them in such a way that they feel artful and dance like (earning his movies the loving term ‘bullet ballets’) and it’s this ability to balance the plot and character progressions in action sequences that makes A Better Tomorrow the game changer it remains.

Say what you want about the intense bro-mance you will experience in A Better Tomorrow or its almost overpowering emotional beats that shine brighter than the already magnificent action set pieces, but this film is a classic – pure and simple. It set up the international careers for almost all of its principal cast and crew (outside of Ti Lung, who had already had a decade of being a Hong Kong A-lister at this point) and it set the ground work principals for what modern action films should be to this day. A Better Tomorrow might not be what many people expect when it comes to classic action, but it’s so much more.

Written By Matt Reifschneider
Posted by DarkReif at 10:43 PM