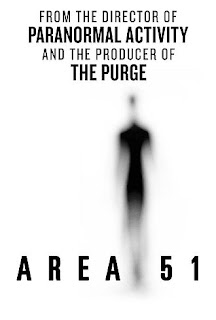 Oren Peli’s movie worth essentially skyrocketed overnight with the success of his film Paranormal Activity. His follow up, Area 51, however, seemingly disappeared into the void for years as he left the director’s chair to become a very successful producer. After six years of development (!), Area 51 finally was released to a rather quiet escape on VOD and then home video. After watching the film, it’s understandable why it was “tinkered with” for over half of a decade. The film is a pretty massive letdown in comparison to his previous directorial effort.

Reid (Warner) has become obsessed with Area 51 since an incident at a party three months prior that's left him mentally uneven. He’s got his two friends (Bragg, Rovner) convinced to help him break into the elusive government base. He has the material, the man power, and a young guide (Nik) whose father previously worked there. Now they just need to record what they see in the base before it’s too late to see if the truth is hidden in there.

For a movie about raiding one of the world’s most notorious government facilities to see if killer aliens reside there, Area 51 is shockingly boring. No, I’m fully serious. This film is horrendously boring. Our three “bros” are terribly generic, the opening sequence to set up the shock of their disappearance for the found footage element is rudimentary, and the actual build up to the breaking in of Area 51 is lackluster in its execution. There was not a single point during the film that I cared about their plight or about their safety within the plight. It’s not until the last 10 minutes or so that the film finally seems to get some momentum and by that time it’s far too late. Until that time the film just wanders about its premise, tagging in little details that never quite come back full circle, and it feels like there is no end game in sight.


For the man who redefined the ‘found footage’ angle for horror films in a whole new generation, he totally misses out on captivating the strengths of the style for Area 51 too. The editing seems too haphazard and it sincerely lacks any kind of atmospheric build until the final act…and like I said above – it was much too little and much too late. Some of the sequences seem to lack a flow or coherency to the structure and it makes for some frustrating beats. There are some fun and ambiguous sequences at the end that give the film a bit of punch, but even then it seems like Peli misses the mark to really capitalize on the concept of the film.

If you are a fan of Peli’s work as a producer since Paranormal Activity, it’s probably wise to skip out on Area 51. It lacks the creative streak of his previous film and the low budget effective scares of almost all of the films he has produced while this film sat in some vault somewhere and collected dust. It’s not scary, it’s not clever, and it’s not well executed. If it wasn’t for the last ten or fifteen minutes, Area 51 would have been a complete loss. At this point, it might have been best if Area 51 remained buried.