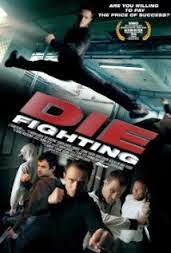 The Z Team, who garnered much success from their online mini-movies and various members serving as smaller roles in larger action flicks, have gone ahead and made their first full-length movie on their own. Like their online flicks, their debut feature Die Fighting (also known as The Price of Success) acts more as a highlight reel for the stunt and fight work of the team more than as full film. Granted, the group certainly aim high with the flick in its meta-concept and relentless fighting sequences, but even that can’t make up for some of its flaws.

The Z Team are seeing their success pay off, but a mysterious director wants them to be in his movies. He kidnaps Fabien’s (as himself) girlfriend and holds her hostage so that they must do what he asks, which includes getting them into a lot of problems with gangs, police, and drug dealers. Can they continue to throw themselves in danger’s path to save the damsel in distress…or will they die fighting?

The idea of a ‘found footage’ action flick isn’t wholly appealing to me initially. Die Fighting makes use of it as best as possible (the twist at the end does explain a few of the inconsistencies of style in the format, but not all of them) and it allows the Z Team to work with a miniscule budget, but even the meta concept of the team being forced to make a movie as they actually make a movie doesn’t make the style work in full. The constant lens whirs and sudden shifts can be annoying and while the found footage spin doesn’t detract from the action, it certainly doesn’t seem realistic enough that all of the hidden cameras are placed in all the right spots for it.


Outside of the stylistic choice, Die Fighting does have a better success record. The acting is not very strong in most any way as the dialogue often feels forced and the relentless pacing makes the film feel more like a real life version of the NES game Double Dragon than a true film. That seems to be the intent of the film though. While it does think itself rather clever in the final twist, the film sticks mostly to what its strengths are – the action. The action here is relentless, diverse, and effective. Outside of a few budget restraints and some amateur decisions from director Fabien Garcia, the action is impressively choreographed and executed. There are gang fights, a SWAT team hide and seek chase piece, gun battles, and  (of course) classic one-on-one hand to hand combat in the third act. In particular, the final fight is impressively shot and paced and an earlier fight between Didier and Chan highlights the group’s martial arts backgrounds. If anything, this film is worth it just for the fighting.

Die Fighting earns an ‘A’ for effort, an ‘A’ for the fightwork, and a ‘C’ for the execution of the rest. The Z Team showcases some thoughtful ideas in the film and it works as a massive highlight reel for them, but outside of die hard action fans or martial arts junkies it may not resonate with the viewer. For this guy, it was a massively entertaining watch in the end and worthy for recommendation to those of the action inclination.