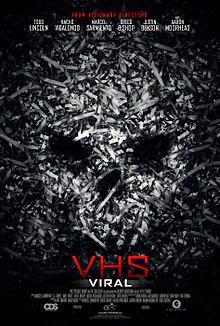 They say that the third time is a charm. When it comes to the third V/H/S entry, this is not the case. The randomly titled V/H/S: Viral (Can a VHS actually go viral? Is tape trading even a thing anymore?) is something of an archetype for another term: missed opportunity. It was cause for concern when they announced this third entry and the names Wingard and Barrett were nowhere to be found as their influence was one of the reasons that the first two entries were so much fun despite the hit or miss nature of the anthology film. Viral suffers from their missing touch too. The collection here might have looked good on paper, but the resulting collection of short horror stories are anything but good and it leaves this latest entry as the one that might derail the franchise.

A young man finds himself at odds with a mysterious ice cream truck, when his girlfriend goes missing while trying to film the police in pursuit of the vehicle. As he chases it down, he finds that a mysterious broadcast has been playing some weird and macabre videos leading him to believe the two are connected.

The above synopsis is only one of the stories that Viral highlights and exists as the ‘wraparound’ tale that the other stories exist in. While I appreciate that this story, which continues in a very loose manner the wraparound tales in the first two V/H/S films, takes it a bit further with the subtle use and mysterious nature of the sinister collection of horrific videos, it rarely gives the whole film the structure or flow needed to feel like the earlier entries. There are some intriguing ideas (I actually enjoy the idea of these tapes ‘going viral’), but it does not present the open concepts in a way that’s fun. It comes off as more frustrating and unfocused then it should.


That’s just the tip of the iceberg though. Rarely is the wraparound story for an anthology the best portion of the film, so the guts of Viral needed to step up to carry the weight. Outside of one story by director Nacho Vigalondo called "Parallel Monsters" (the director of the massively underrated Time Crimes), the rest fall to the same short falls. “Dante the Great” carries some fun almost Tales from the Crypt like vibes to its ridiculous premise, but it never runs with the humor and the found footage style doesn’t do its ridiculous ‘magic cloak’ premise any favors. The final story “Bonestorm," one about skateboarders who uncover a ritual in rural Mexico, carries no weight to it and is utterly, 100% filler in the film.

The only story that seems to even really try in Viral is the above-mentioned "Parallel Monsters." While the short film itself is rather goofy in its final twist, the execution of it is top notch and director Vigalondo adds enough atmosphere and dread to the weird science fiction plot that I was hooked within a minute of it starting. The more I think about it though, the more it doesn’t hold its own to most of the segments in either of the first two films so perhaps it just seems stronger when it is surrounded by the massive amounts of garbage that the other stories throw out there. Either way, it’s perhaps the only reason that this film earns the rating that it received.

V/H/S: Viral is just one massive missed opportunity after another one. I don’t think many of the ideas or concepts are all that disappointing, but the manner that the film makers jam them together just reeks of a rushed product and botched consistency. There is definitely potential to be found in Viral, but the end product is far from being as fun or solid as the previous two entries. It’s mostly for those franchise whores out there like me for viewing. Anyone else might be recommended a skip.