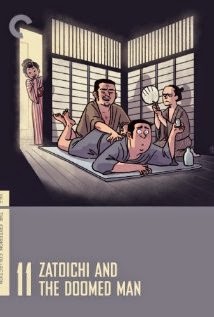 “The ocean doesn’t have another side.”

Here we are eleven films into this iconic franchise and it’s impressive that the quality of each entry has held up as much as it has. Considering the short span between each entry (we are talking about multiple entries being released EACH YEAR), this is a feat in itself. While some entries obviously falter compared to other stronger ones, the overall quality is impressive. For this eleventh entry, Zatoichi and the Doomed Man, remains as one of the lesser entries although it still comes off as a relatively well put together entry even if it tends to be a bit less than memorable.

While imprisoned for a short while, Zatoichi (Shintaro Katsu) meets a panicky man who claims to be framed for crimes he didn’t commit. Not believing him, our wandering blind swordsman goes on his way only to discover through a series of events that the man may not have been lying. Through this set group of circumstances, he will uncover a new conspiracy that will have him a wanted man once more.

To give Zatoichi and the Doomed Man a distinct value within the franchise, I do have to admit that the addition of being ‘self aware’ does make this entry a bit of fun. After Zatoichi learns of the doomed man’s predicament and heads down the road, turns towards the camera, and flat out states ‘boy, I sure do get into trouble when I help people. I better not this time.’ It’s this almost meta sensibility that allows this eleventh entry to toy a bit with the established formula without deviating too far from it. They even have a rather comedic new ‘side kick’ who steals Zatoichi’s name and mimics Katsu’s performace of the blind swordsman for funny effect in the film. That’s how far the film takes some of its self-aware moments.

Some of twists on the formula work in surprising ways. The plot itself starts off pretty scattered with seemingly endless subplots sprouting left and right. By about half way through, the film felt like it was going to train wreck in a spectacular way as it felt it had no direction or purpose to its seemingly random events. Then it, by some miracle, gets almost all of the threads to string together to make a more cohesive story. Just that tact, if anything, earns Zatoichi and the Doomed Man a watch from samurai aficionados.

However, not all of the changes to the formula work for the best. Due to the rather complicated plotting of the story and the shorter play time of the film itself, Zatoichi and the Doomed Man tends to feel a bit sparse in its depth. Zatoichi’s character tends to be more surface level here than we have seen in many of the other films, he lacks a true villain to truly test his meddle against, and many of the artistic tidbits – like the running theme of the ocean and the beach – tends to feel brushed over too much. All of those elements are present in this film, but rarely are they a contributing factor to the overall film’s quality or enjoyment.

For Zatoichi fans, Doomed Man is a decent entry that plays up to fans of the series with its meta concept and toying of the standard formula. It does lack a bit of the heart and depth that makes many of the earlier entries so classic, but as a somewhat new spin for the franchise it works in many ways. In the end though, it’s still one of my least favorites of the series as I work my way through it. Zatoichi and the Doomed Man is mostly for fans.