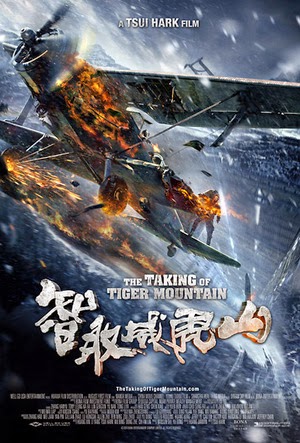 In the last handful of years, Tsui Hark has been a very busy man. He has consistently released massive big budget films to big box office numbers in China. Unfortunately, the quality of his films has been anything but consistent ranging from fun and entertaining (Young Detective Dee) to just plain baffling (Flying Swords of Dragon Gate.) For his latest, The Taking of Tiger Mountain, Tsui Hark mixes his new found love of modern spectacle with a bit of his roots in heroic bloodshed for a massively entertaining film that works in some surprising ways while still being a rather oddly structured flick that lacks flow.

Right after the end of World War II, the military in China were having trouble keeping the massive clans of bandits under control. A small group of soldiers have been tasked with investigating and finding a way to bring down Lord Hawk (Tony Leung Ka Fai) and his vicious gang. The problem? The villains occupy a massive artillery stronghold on Tiger Mountain. Even with the help of an intense military spy like Yang (Zhang Hanyu) these young soldiers are going to have to muster up all their talents and strength to take down the eclectic gang leader.

The Taking of Tiger Mountain is a decent film made up of a lot of great parts. Tsui Hark ably injects a lot of different elements into the film to craft a winding and entertaining ball of dramatic energy and big action packed spectacle. In many ways, The Taking of Tiger Mountain is a return to form for the enigmatic director. When the wartime story starts off, it builds on a very dramatic foundation with themes about loyalty, brotherhood, and the fight for good. Led by a larger than life cast portraying some larger than life characters (Lord Hawk might have passed as a Bond villain in the 70s,) it strikes a strong balance between the entertainment and dramatic punch. The large ensemble cast does tend to steal any legit character development out from under the strong actors and with a film that runs almost two and half hours I can’t blame them for cutting a lot of the smaller roles short.

This is partnered with plenty of gun fu and explosive action set pieces throughout that remind us of Tsui Hark’s days with John Woo and the heroic bloodshed films he helped establish. As the film starts garnering momentum in the second and third acts, Tsui Hark and company pick up the pace to deliver some massive battle set pieces. A bandit raid on a small village quickly turns bloody and the final siege of Tiger Mountain contains some Bond like charisma and spectacle to its proceedings – even if the film misses on some opportunities to play up the fights for the three or four gimmick henchmen to their proper levels. The film is shockingly violent at times in these action set pieces and some of the 3D gimmicks can be a bit too cheesy for their own good. This does, however, lend to the blend of modern spectacle and classic action that really does bring the best of both worlds for Tsui Hark films through. Fans are certain to enjoy these moments.

The big problems with The Taking of Tiger Mountain lie in the rather underutilized structure and length of the film. The film is actually told as a story by a young college grad in modern times. This sort of structure tends to be forgotten as the film rolls on (there is only one moment where the story and the storyteller overlap outside of the beginning and end) and it caters itself to a lot of logistical holes. The storyteller and his own character are significantly underdeveloped to be a true structure for the rest of the film and I would be hard pressed to say that The Taking of Tiger Mountain might have been better had this been completely cut out. It also allows the film to actually pull off two endings for the Taking of Tiger Mountain story – one where our undercover agent and the villain have a lackluster battle and one where they literally fight on a moving plane. Both are, strangely enough, rather awkward: one for being too quick and the other for being too drawn out and relying on some questionable CGI. Had The Taking of Tiger Mountain went with a more straightforward structure it would have eliminated some of these issues.

All in all, The Taking of Tiger Mountain is one of the better films Tsui Hark has delivered in his most recent career surge. Sure the film might have some issues with its narrative and structure, but the massively entertaining pieces overcome many of problems that arise with the CGI and character development. The action is pure spectacle and for those with a nose for fun, outrageous set pieces, you are going to find plenty to devour here. It’s not perfect by any means, but I was hooked in the first ten minutes and I never let go from there.