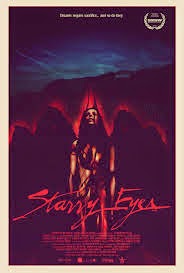 There is a trend that has been happening in the last few years concerning horror films and that trend is to be a ‘throwback’ film. Whether it’s the John Carpenter worship in Almost Human, the Polanski elements in The Lords of Salem, or the straight up ‘torn from the 80s’ feeling of House of the Devil, there is definitely some great homage to the yesteryears of horror going on right now. One can add Starry Eyes to that list. For this little horror-that-could flick though, the blend of modern elements and old school aspects are what make it so intriguing. Partnered with some efficient and thoughtful execution, Starry Eyes is more than likely going to top my list of best horror in 2014 for just those reasons.

Sara (Essoe) is an aspiring young actress desperately trying to make it in LA. Her job at a Hooters knock off food joint demeans her, her friends often don’t understand her plight, and the real world continually overlooks her talent. When the opportunity to score the lead role in an upcoming horror film comes to her, she will do anything to garner the confidence and recognition she desperately craves…even if that means sacrificing a few things in the way.

While Starry Eyes certainly owes its fair share of success in recreating some of the themes and style of old school horror pioneers like Polanski and Cronenberg, it still feels remarkably refreshing in its dedication to its concept. The plot is remarkably subtle, only hinting at cult like elements and ritualistic pieces that are never fully explained, and it relies heavily on atmosphere and the lead character to carry the film. When it comes to the atmosphere, directors Kevin Kolsch and Dennis Widmyer pull out some great stops in getting it going. The pulsating synth score undermines much of the tension, the character interactions are all aptly subtle and effective in their small portions, and the choices in editing only add to it all. I have to also throw out some huge kudos to lead actress Alexandra Essoe for her diverse and stunning performance in the film. Starry Eyes required such a performance to work and she does it with such charm and devastation that one can’t help but be completely drawn in.


Starry Eyes then takes a rather unique twist in the second half instead of going full Polanski, it slides in a bit of Cronenberg in for good measure to leap frog the film from dark drama to full on horror. As our lead starts to crumble in her personality, we get to see some full on body horror. In a way, when the film started this shift it felt like it was the film that Contracted desperately wanted to be so that when we see the changes happening (and the gore that comes with it) its much more effective and heart breaking to go with the terror we feel. Not to give to much away, but it only progresses from there into some intriguing and open ended territory, which like most of the rest of film, works through its subtle hints and rather vague approach.

This is not the kind of film for everyone though. The vague plotting and character heavy approach can be a bit frustrating to those who didn’t buy into the style and concept while the slow burn approach to the first half (and subsequent ‘decay’ in the second half) may very well divide audiences. For this reviewer however, the dedication to the atmosphere and the old school approach to the characters, plot, and style makes for a film that takes its more modern touches and only improves on them. Starry Eyes is the hopeful soul of a genre that is often plagued with gimmicks and formulas, by taking those exact elements and making them effectual and human.