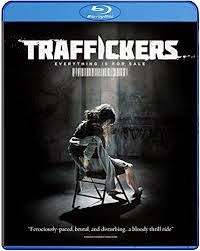 “Dirty your hands a bit and it’s a great world.”

My enthusiasm for Traffickers was more luke warm than anything. The trailer looked decent and knowing just how good the Korean market is for a thriller, I expected a solid film at best. Yet, time and time again, the thrillers that come out of South Korea continue to impress and Traffickers does just that. It takes some time to set up the premise, but the pay off is substantial and the execution is as lofty as ever. This one is truly a gem to find for fans of tension and suspense.

When it comes to smuggling – even in illegal organ transplants – Young-gyu (Im Chang-jung) was one of the best. He’s been somewhat retired for a while now, after a terrible accident leaves one of his crew dead, and life has been anything but easy. When the woman he has fallen in love with needs an organ for her ill father, he decides it’s best to step back into the game…for one last time.

There is a certain expectation I have for Korean thrillers and when Traffickers started off it met, but rarely exceeded those high expectations. The premise of a morally torn black market runner seems legit enough to compound a dramatic thriller on, but the film tended to hit a lot of run-of-the-mill basics in its foundation with it’s semi-romantic subplot, the ‘dead friend’ who pushes our protagonist towards a moral gray area, and – of course – the villainous business partner that forces our hero back into the game with rants about ‘you owe me’ and ‘you were always the best.’ Traffickers did have those grade ‘A’ executions going for it in this first half with Im Chang-jung delivering the torn hero remarkably well and the secondary cast delivering memorable and impactful supporting bits to get the audience hooked just enough to set up the film. The foundation might be a little cliché, but Traffickers sells it with enough charm and strong executions to get it going.

Traffickers then decides that enough is enough with the generic tropes and starts gunning it in the last half. Starting with the tense game of time and poor circumstance that comes with their devious game of body organ transplants on a boat that features some great suspense and fun (perhaps, the dark humor and often violent nature of the concept wouldn’t constitute fun for some) moments, Traffickers really starts cooking. By the time we get just over the hour mark the film hits full speed. Twist after twist after twist, the last forty minutes hits a ravenous frenzy of chases, betrayals, and violence that only the Korean market can pull off as mainstream. This final act is what really earns the film it’s high-grade rating and makes all of the mundane beats of the first act (and most of the second) worth the time and effort.

Like many of the other South Korean thrillers that have made their way over to the US in the last handful of years, Traffickers most certainly rides the line of dark violent content with thoughtful human exploration of themes. The execution does the film wonders to set up the phenomenal finale. It may not be as groundbreaking or intense as instant classics like The Chaser, Sympathy for Mr. Vengeance, or The Man from Nowhere, but Traffickers does solidify itself to be mentioned in with those films.