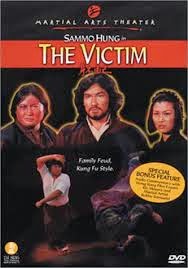 While Sammo Hung has remained a staple of my martial arts and kung fu diet throughout my life as a fan, I had never participated in The Victim. A regularly mentioned fan favorite, The Victim combines the onscreen talents of Hung with Beardy (Bryan Leung) in a tale of deceit and love-on-the-run that features some of the fastest kung fu choreography that I have ever seen in my life. It’s a tricky little film, as the plot tends to take some wicked twists and turns throughout and it piles on the kung fu with just a pinch of humor. It’s easy to see why it’s a fan favorite and handedly leaps up to be one of my own favorites.

Chan-Wing (Sammo Hung) is a wandering martial artist looking for a worthy teacher to take him to the next level and when he meets the hermit like Chun Yau (Beardy), he finds the teacher he has always wanted. Chun Yau doesn’t particularly want a student as he and his wife try to lay low from his villainous brother Chang Yi (Jo Ying). With secrets hidden at every corner, Chun Yau is going to need Chan-Wing’s help if he is going to stop running.

What makes The Victim work so well is that the film consistently keeps the viewer spinning. The opening third of the film takes a decidedly light hearted approach with Beardy playing the straight man to Sammo Hung’s often ridiculous comedic routine with much of the kung fu sporting a classic Sammo humorous touch. As we begin to delve into Beardy’s character though (who quickly takes the reign as the lead in the film), the film takes a dark streak and twists itself into quite the tragedy featuring some touchy subjects like jealousy, rape, and coercion. Beardy owns in the lead role, portraying the emotional aspects as effectively as he flies through the extensive fight choreography, and he is surrounded by a phenomenal secondary cast. There are some wicked twists to the plot in the third act (No spoilers here, fools!) and needless to say that they work out impressively.

Often enough, kung fu films either massively succeed at storytelling or action. The Victim handles both with ease. In fact, when it comes to the highly complex choreography and fight sequences, The Victim features some of the most ridiculously fast-paced and impressive work I’ve seen from director Sammo Hung. While there is plenty of fighting to be found here, Hung and company keep it quite diverse throughout (again with some humorous pieces in the beginning that gives way to much more intense pieces at the end) and they slowly build to the finale…a finale that is as explosive as I have ever seen from a one on one battle in a kung fu film. If you are looking for a film of flying feet and furious fists…The Victim is the one to watch.

Sammo Hung as a director has crafted some of the biggest martial arts classics and The Victim fully deserves to be added to that list. The combination of thoughtful character storytelling mixed with just a bit of humor and vicious kung fu fight sequences might be some of the best of his career. Riding on the back of a superior performance from Beardy, The Victim is an instant classic and gets my full recommendation.