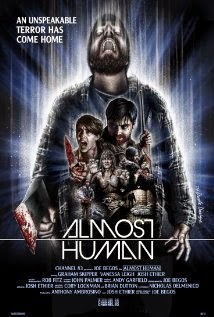 The impact of John Carpenter recently is something else. Whether it’s the mainstream release homage in The Purge: Anarchy or the low budget worship that is contained here in the science fiction horror of Almost Human, his presence is becoming such a force in the young filmmakers that it’s impossible to ignore. This low budget flick owes so much to Carpenter that at times it’s startling and unlike the other film I just mentioned, the execution of that influence is not nearly as impressive this time around. There might be an underground midnight cult film to be found in Almost Human, but it was hard for me to get through some of the massive flaws to even enjoy it in that manner.

Two years previous, Seth (Skipper) finds himself running from some menacing lights in the night sky. In the process of hiding, his friend Mark (Ethier) goes missing. No one knows what happened and Seth’s memory is a bit fuzzy about the events. Mark has returned though and he’s not himself. He seems driven by an unearthly force and his intentions seem less than humane.

Almost Human is one of those films that I desperately want to like as it’s obviously made with a lot of effort on a very, very low budget. Unfortunately, there are some aspects of this film that make it extremely hard to do. Firstly, the acting is borderline atrocious. Outside of some fun The Thing inspired ‘possession’ work from Ethier in the latter portions of the film the rest of the cast struggles to pull off the rather intriguing concepts and scenes. Their dialogue certainly doesn’t help so that when Seth confronts Jen about the return of her missing husband it comes off as cringe worthy rather than an emotional beat to really drive the final act forward. The film also suffers from its budgetary restraints when it comes to the special effects. I have to admit, that for what they had they did particularly well, but the results are still a rather mixed affair as it blends a bit of Invasion of the Body Snatchers into the pot with its plot progressions.

That being said, there is an underground cult status atmosphere emanating from Almost Human that will play to certain crowds. The film randomly takes some grindhouse swings at time in the final act with its bursts of violence (and a sequence where Mark attacks his ex-wife that comes out of nowhere, but certainly made me pretty uncomfortable and worked to really solidify him as a villain) and in these moments of extremity, one can see that there might be some underground appeal. For this reviewer, the attempted blends of serious science fiction character beats with the grindhouse horror elements didn’t quite gel as well as one would have hoped.

Almost Human is simply a disappointment overall. The John Carpenter influence partnered with some of the solid atmosphere and charming low budget elements make me want to enjoy this film more, but the sub-standard acting and messy plot progressions bog the film down to the point that it was hard to get into it. For some various people that are willing to overlook its issues, the film will work. For me though, it was a missed opportunity to create a thrilling and impactful sci-fi horror flick.