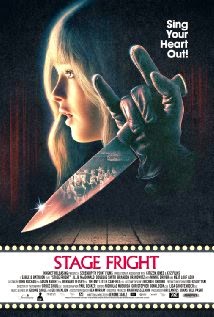 Despite graduating college with a degree in theater, musicals have always been one aspect of film that have never agreed with me. They are just so presentational, so cheesy. Yet, I was rather intrigued by Stage Fright and the blend of musical and slasher horror film. I wouldn’t say I had high expectations going into this tongue-in-cheek flick, but I was fascinated enough to delve into it for review. The resulting combination between slasher and musical is certainly fun and there were some great inspired and very funny moments, but it came off ultimately as a mixed effort that lacks a bit of flow to make it all work.

Camilla (MacDonald) has already lived through one horrific experience when her mother (Driver) was brutally murdered at her Broadway debut of “The Phantom” when she was a child. She now works at a small summer theater camp with her brother (Smith) under the supervision of her guardian (Aday). When they announce that the summer show they will be performing will be a new rendition of “The Phantom,” she decides to try out for her mother’s role. Too bad someone wants to stop this show from happening and they will leave a body count to make sure it all comes down.

At the core of Stage Fright, director/writer Jerome Sable crafts a film that is as much homage to classic slashers as it is a comedic horror flick. The humor tends to be more about timing of some of the characters’ lines and cliché moments then the spoof that I have seen a few reviews falsely claim the film to be and it creates a fun and spunky film overall. The musical numbers are delightfully tongue-in-cheek and keep the film moving forward (particularly the villain’s heavy metal style of music and a song where he repeatedly shouts “Shut your fucking face”) and the slasher elements are silly enough in their execution of gore and kills that its hard not to laugh them off at times. Occasionally, I felt like the film could have pushed some of the secondary characters even further for comedic purposes, but overall it works to create a film that a viewer can simply have fun with.

Ultimately though, Stage Fright comes off as a mixed bag. While the comedic moments work and the slasher moments work, the flow in-between the two styles can be a bit choppier than one would expect. The film starts off with a very strong balance between all of the different aspects as it blends some serious horror beats with comedic timing, but the latter half of the film tends to lose sight of getting that balance to work and the final act tends to be a little too serious for my tastes to get it to work as smoothly as it could have…particularly as the ‘twists’ of the plot start to reveal themselves to the audience.

For Stage Fright, the concept is a much better idea than the movie. The film is packed full of fun moments and silly aspects, but the script and flow of the feature tends to undermine much of what the film has going for itself. It’s not very often that a slasher musical slides its way into my viewing queue so Stage Fright does have that going for it. Outside of the horror and/or musical audience though, it might have be as fun.