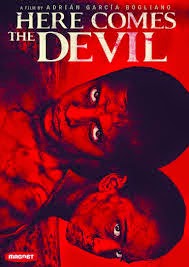 While many horror films will garner mixed reviews overall from various sites and reviewers, I usually stick to particular ones for recommendations. It was from these various sources that I kept hearing about Here Comes the Devil and how creepy it was. This Mexican horror flick is definitely creepy at times, but the overall quality and flow of the film didn’t do a whole lot for me as it randomly shifted gears throughout and tried to balance out the grindhouse aspects with the arthouse elements.

During a family outing on the outskirts of town, two young kids (Garcia and Martinez) go missing in the rocky hillside. Stricken with grief, their parents (Caro and Barreiro) vow to figure out what happened to their children. It doesn’t take long for the kids to magically reappear though and it leaves the spouses relieved but slightly confused. When their kids begin to act relatively odd in the aftermath though they decide they need to figure out just what happened in that time span.

The most intriguing aspect about Here Comes the Devil arises from its rapidly changing focuses throughout the film. For some this leaping of styles might be considered unique or clever as director Bogliano even goes as far as jumping into different horror subgenres, but to be honest, I found it utterly distracting and disjointed. The film starts off as a pure grindhouse flick opening on a lesbian sex scene before rapidly exploding into a gruesome serial killer sequence (which knowing the synopsis ahead of time had me slightly confused) before it heads off towards the main chunk of the film with the parents and their missing children. At this point, outside of some more random sex sequences, the film takes on a more realistic approach to the film focusing on a dysfunctional family environment and even goes as far as moving into torture-esque revenge territory as the parents become convinced that their children have been molested by a weird man on the outskirts of the city. It’s not until the final act does the truly creepy aspects of the film come into play (shifting into a possession film at this point) and we get some clever twists that actually work. It’s like a massive roller coaster ride as Here Comes the Devil shifts tone and focus to get film going and unfortunately, I wasn’t fully enjoying the ride.

The execution is solid enough with some subtle and impressive performances from the two main adult actors and the sound editing and visuals definitely work for the heavy atmosphere of the film, even if a random sequence featuring a scared babysitter gets rather trippy for the sake of trippy. The kids don’t get a lot of time to show a ton of their skills as most of the film requires them to simply be odd and it does hinder the impact of their change that could have sold the film even further. The random bits of gore and supernatural elements work for what they are in the horror aspects and do add a bit of pizzazz to a film that’s mostly focused on being emotionally heavy.

In the end though, it doesn’t matter how well a film is executed if the foundation it is built on is flawed which is the case with Here Comes the Devil. The awkward shifts of tone and focus for the film undermined the entire experience and atmosphere of the film enough that it was hard for me to even keep my attention on what the endgame of the film was let alone be drug into its deeper elements. Many of the attempted messages of parenting and marital issues are undermined by the grindhouse aspects (we get it, sex is symbolically evil and bad things happen when sex is involved) and in the end I found Here Comes the Devil to be a series of missed opportunities instead of an artful horror flick. I seem to be in the minority on this one though, so take it with a grain of salt. Here Comes the Devil is definitely an experience to watch – good or bad.