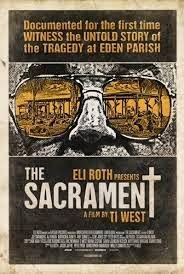 Ti West is the kind of director that splits his audience a bit with his style. Some claim him a hack for his lacking substance to his films, others claim him a genius for his atmospheric and slow burn approach. Technically, I don’t fit into either category. I quite enjoy his throwback approach to film and his dense camera work and subtle plots, but really it’s nothing wholly original. When The Sacrament was announced I was excited, particularly with Eli Roth’s name attached as a producer, but the fact that it would be a found footage flick scared me a bit. Luckily, The Sacrament easily handles the stylistic approach with ease and ultimately reveals one of the creepiest and unnerving films of the year.

A small documentary company called Vice, featuring host Sam (Bowen) and cameraman Jake (Swanberg), has just had an interesting opportunity land in their lap. A friend (Audley) just received a letter from his sister Caroline (Seimetz) to have him come visit her in a secret compound where she has been living in recuperation from her addictions. It’s an opportunity for them to dig into a religious cult and see just what keeps people there. What they find though may surprise even the most cynical of detractors.

The Sacrament never seems to hide the fact that it is based (loosely, if you will) on some of the real life cult occurrences that consumed news throughout the last handful of decades. To its benefit, it uses it as ground to really build its ‘realism’ which is only accentuated by the documentary style of the film. Instead of a detriment to the film, the found footage actually adds to the entire experience. It gives it a real time sense of eerie atmosphere that just makes it feel that much more real.

Never did I feel scared in the film, like so many horror films attempt to accomplish, but West and company instead opt for that unnerving realistic factor which is executed in spades. In addition to the found footage and realistic plot just mentioned, I have to admit that it was the acting that had me hooked. AJ Bowen and Joe Swanberg handle the narrative with soft hands, never really forcing much of the subject matter in the script, so that when the finale comes about in all of its horrifying glory it packs one hell of a punch. To make it even more impactful, the ‘Father’ of this compound is enigmatically charismatic on screen and promptly eats the basic dialogue he is given. Actor Gene Jones simply owns in the role and it adds to the experience.

The Sacrament isn’t going to be a film for everyone as it certainly has that slow burn Ti West style to how it goes about its plot. At its core, it’s basic in the writing and even more basic in the premise. However, the execution is superb. The characters are all relatable, the situation unnerving, and the film magnetic. Definitely one of my favorites of the year.