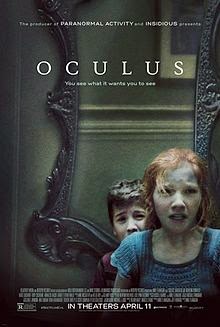 Killer mirrors. It’s not necessarily a new subject matter when it comes to horror. Hell, we even had two entries into the Mirrors franchise, which the original was a remake to begin with. Yet, I was still hesitant to dive into Oculus despite some of its rave reviews and recommendations from friends. Could a killer mirror film truthfully be as good as people claimed? Oculus IS that good. Director/writer Mike Flanagan crafts a thoughtful and utterly creepy flick that dominates as one of the best horror films of the year. Enough so that I feel bad to not support the film when it came out in theaters.

Tim (Thwaites) has just been discharged from a mental hospital. His sister Kaylie (Gillan) is eager to help him get back on his feet in the real world. She insists that he help fulfill his promise to her first. To prove that the massive mirror in their house is what drove their father (Cochrane) insane. To prove it played tricks to entrap their mother (Sackhoff). To end its decades of deception that has devoured countless owners before it. Can they stop the evil Lasser Glass or will history simply repeat itself?

The beauty of Oculus is that the film plays out like two films that intertwine into one. We actually have two sets of stories being played out in full. Firstly, we have the present day adult brother and sister duo who are set to prove and/or destroy the Lasser Glass for what it is and secondly, we have the child versions of the brother and sister duo who see their parents succumb to the tricks of the mirror. The combination of current story and flashbacks to fill the voids isn’t a wholly original concept, but Flanagan and company do their best to not only make them parallel each other. By the final act, the two stories are so intertwined that Flanagan uses imagery from both in the other plot to create this nightmarish parallel existence to show just how powerful (and similar) the two stories are and how it shapes the two lead characters. Partner this smart plot structure with strong acting work from all six of the ‘main’ characters – as their mother and father play huge roles in the older plot line – and the resulting storytelling is impressive to say the least.


Oculus is a horror movie though and no matter how artful the structure and plot progressions are, as horror fans we want to know if the film is scary or not. Well Oculus only plays up ‘boo’ scare factors sparsely unlike so many other ‘ghost’ and psychological horror flicks do. Here Flanagan instead focuses on crafting an deep atmosphere and uses visuals and disturbing concepts to scare us rather than full on gore or jump scares. Although both the gore and jump scares are present, it’s this thoughtful creepy factor that truly makes Oculus work like it does. It gets to the point that the audience is more concerned with figuring out if the horror is real or a trick of the mirror and that sets us up for those gore and jumps to be as effective as possible. We root so strongly for our protagonists not to fall into the influence of the mirror that when we see something as simple as the sister bite into an apple (which may or may not be a lightbulb) we are screaming at the top of our lungs for her not to…in a way falling into the mirror’s influence ourselves and letting our own perceptions of the film be tricked.

Horror in 2014 might be weak overall, but the smart and wicked execution of Oculus highlights that modern horror is not dead and can be just as impactful as it was three decades ago. It creates a relationship for the characters that makes the nightmare they have to live through a nightmare for us no matter how ridiculous the plot might seem. Mike Flanagan has made quite a splash with his feature length debut and I’m whole-heartedly looking forward to see where he goes from here with his career.