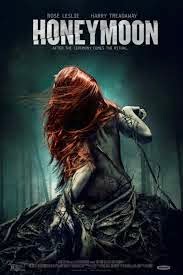 It’s no secret to those whom follow my writing that I sincerely love a great atmospheric horror film. Too often, particularly in this day and age, horror films would rather go for the gore or the jump scares rather than build the tension to sell the horror to begin with. This is not the case with Honeymoon. In fact, this is a slow burn kind of horror film that requires its audience to be fully invested in the details and small nuances for the payoff to work. Thusly, it’s not a film for everyone. For those willing to leap into the rather simple, but inherently effective, creepy atmosphere and bewildering minutiae then Honeymoon is going to rank up as one of the best of the year.

Paul (Treadaway) and Bea (Leslie) finally took the leap and got married. To celebrate, they plan to have their honeymoon in a remote family cabin in the woods so that they can be alone to really celebrate their union. When Paul finds Bea wandering the woods late one night, their honeymoon takes a twist for the weird as Paul starts to wonder: what happened to Bea?

Honeymoon is driven by atmosphere and detail. Not that the film doesn’t go for the gag reflex in the final act as the ‘why’ for all the ‘what the hells’ starts to unveil itself, which I will get to in a bit, but the true highlight of this horror flick is most certainly the first two acts. Starting off with some hand recorded footage of their wedding day where our two leads (and essentially only actors in the film) unveil some quirky anecdotes about themselves and their life together, Honeymoon goes for the character over plot path that really sells the film. Pay close attention to the dialogue and details of the first two acts because its these details that make the film so unnerving as it starts to roll out. This dialogue and subtle plot progression is really hit home by some surprisingly solid performances from the two leads. Both Treadaway and Leslie feel very real as you see the obvious young love crumble underneath the unusual elements of the film and it knocks it home with its creepy aspects.

For the third act though, the film does shift gears into more of a body horror flick. The change flows well enough that it doesn’t feel out of place, but for those who loved the atmosphere of the first two acts the change might be a gruesome one that doesn’t sit as well with you. For this reviewer, it was a shift that needed to happen to really take the film to the next level that it needed to go. The gore is very realistic and very unnerving (particularly because it tends to hit a few buttons that would make any person so has been in a committed relationship uneasy) and even though the final twist might come off as a bit eye rolling, the natural progression of the film from atmosphere to pure horror works beautifully.

Honeymoon is not a wholly easy film to consume. Two thirds of the film is slow burn atmosphere, which may lose a lot of the younger modern audience, but the final act is nightmarish and grisly which might put off those against some of the shock elements. For this horror fan, the blend was impressively accomplished in all the right balances that are driven by a director who knows the value of tension and uneasy moments and finished off with some stellar performances. Honeymoon is not the easiest film to love, but it’s hard not to appreciate the detail work that went into igniting this indie flick.