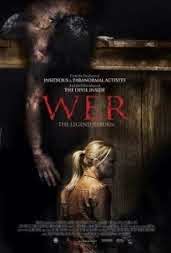 The werewolf genre of horror has never truly been one of my favorites. Too often it’s too much of the same with too little of the inspiration that crafted the long running monster of lore. One thing is for sure, but Wer is not simply more of the same. In many ways, I appreciate the entire concept behind the film and its massive genre leaping. It’s a very adventurous film in that sense. It also happens to suffer from its attempts at being too different from the norm particularly when it comes to its limited budget and weaker script. Sure, there is something to be admired with Wer, but it just doesn’t quite make the cut in the end.

When an American family is brutally slaughtered in the woods of rural France, the police arrest a massive man as a suspect in the murders. A young lawyer (Cook) along with her information guy (Sahay) and her ex/animal expert (Quarterman) are set to represent the odd Frenchman. During their research into his case though, they will find that he might not be what they thought he was…if human at all.

The first half of Wer plays out more like an episode of Law & Order than it does your normal horror film. It’s here that director/writer Bell sets up the basic premise of ‘werewolves’ in the real world where he establishes a realistic tone for the film. It plays out like a court drama, albeit with fairly generic characters and a generally eye rolling ex-girlfriend/boyfriend dilemma for needless drama down the road, and visually he sticks to an almost found footage look for the film. This Michael Mann inspired gritty look doesn’t do the film a lot of favors in the end, especially since it comes off as irritating more often than not, and it takes the audience out of the moment. Otherwise, it does make for a decently intriguing idea about giving scientific reasoning to lycanthrope issues…even if most of it plays like bullshit.

Wer takes its time setting up the idea in the first half and while the execution is hit or miss, I was digging the concept. Which is why it’s somewhat baffling when the film takes a drastic change for the second half. Here the film decides to abandon the Law & Order concept, realism, and subtle details to become an action film. Yes, you read that right. A fucking action film. Not to give too much away (it’s hard not to when the film is pretty predictable overall), but the film goes for a high octane Fugitive-esque chase sequence that features a ton of terrible CGI gore and violence and abandons damn near all of the intriguing elements of the first half for spooks and beat downs. Don’t misunderstand me, I love action films, but this change is rather sudden and awkward compared to what the first half of the film.

I can see where people might like the irrationality of Wer. It sure is a ballsy move to whip from one genre to another particularly in the saturated generic formula of the werewolf film. For this reviewer though, a few more drafts to tighten up some of the moves, dialogue, and characters would have done the film wonders. Not to mention a larger budget for the poor CGI gore in the end and the gritty hand held look of the film. If I were to grade the film I would give it an ‘A’ for effort, but a ‘C’ for execution. Despite my enjoyment of the idea, the execution just didn’t do it for me. That doesn’t mean it won’t do it for you though.