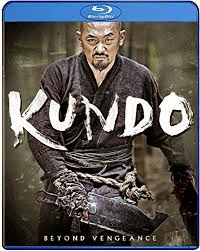 Going into Kundo: Age of the Rampant, I was expecting something like a kung fu Robin Hood sort of flick. I have yet to see any other film from the commercially acclaimed South Korean director Yun Jong-bin (although I have heard that Nameless Gangster is phenomenal) and thusly much of my expectations were based on the basic synopsis you’ll read below this. Boy, was I wrong. Kundo is so much more than just another Robin Hood knock off. In fact, that comparison can only really be made based on the synopsis. What Kundo actually reflects is a wide variety of genres and style, mixed together with brutal precision and executed in a massively entertaining and impactful manner.

It’s the late 1800s and the Joseon Dynasty has fallen into the greedy hands of the upper elite, forcing many of the villagers and farmers on desperate times. A young butcher (Ha Jung-woo) loses his sister and mother at the hands of a corrupt and militaristic rising star in the noble ranks (Kang Dong-won). He is rescued by a rogue band of thieves who aim to restore justice to the area, setting into motion events that will bring the two opposing forces into a bloody battle.

While the film might indicate something more grand on the scale of Red Cliff or the like, truthfully Kundo plays out in a much more basic manner, albeit painted with plenty of detailing and genre bending to make the proceeding film far from feeling rehashed. On one hand it owes much of its structure and narrative to Hong Kong wuxia films. A young man hell bent on revenge joins with a clan of talented fighters to oppose unjust corruption? Hell, even much of the sword play fits right into that dramatic visual storytelling of newer wuxia films, in particular a massive dazzling display of choreography and directorial flair in an ambush sequence set in a foggy ravine.

Yet the characters are far less ridiculous and eccentric as a wuxia normally plays out. Our hero is ably portrayed by the talented Ha Jung-woo (who’s little neck twitch was the perfect touch to complete his brazen cleaver wielding thief) and a phenomenal secondary cast including a strong man, an acrobatic mute, a snarky archer, and their fearless and knowledgable leader, whom often steals each scene, to balance it out. The humor pops up here and there in the secondary characters and it lightens up the mood just enough to prevent the ‘right versus wrong’ morality and revenge narrative from being too heavy. Kundo is littered with this compelling characters.

I have to admit that despite some phenomenal acting and some very impressive action set pieces, the MVP of Kundo happens to be the detailed and often tragic villain of the film. Kang Dong-won adds such depth and gray matter to a rather normally dastardly villain that for a good portion of the film, I was wondering if he might actually become a redemptive character and one who finds the path of the righteous through his characters’ fear and anger. Not to give anything away for how the film ends, but his character arc blossoms into one of the defining bright spots of an already stellar film. It was enough that I had to give that actor and his portrayal their own paragraph in a short length review. It’s impressive to say the least.

Kundo does occasionally suffer from a sticky structure (that in the first third relies on a narrator to keep the audience caught up in the historical context of the film) and there are some intriguing samurai/western motifs that pop up that may not always sit well with the casual film audience, but the film is so impressively executed onscreen and in its storytelling that rarely did it bother me like it should have. In a year where there have been plenty of pleasant surprises in the action genre, the dramatic beats and refreshing genre bending of Kundo shoots this film to being on the best of the year. Powered on the slashing swords of anti-heroes and the weight of social morality, Kundo is a must see film for all cinephiles. Robin Hood, eat your peppy heart out.