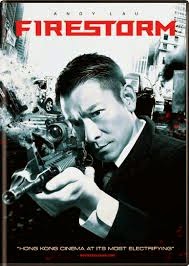 The reach of John Woo has been pretty massive. Whether it’s in Hollywood or Hong Kong, his style of taking mediocre scripts and making them massively entertaining films has been a foundational move for action filmmaking. Going into a film like Firestorm (and no, this not the film with Howie Long), you almost have to assume that it’s going to be John Woo-ish. Which, of course, Firestorm is most definitely inspired by the gun fu, bullet ballet focus. Like many films that pull that direction Firestorm is hindered by a messy script, but the resulting cops n’ robbers entertainment that it presents is a blast to watch still.

Lui Ming-chit (Andy Lau) has spent a good portion of his career in Hong Kong trying to bring down the crime lord Cao (Hu Jun). After a vicious armored truck heist though, he might have the edge to get into the loop of the crime syndicate. How far will he go to take down his nemesis though? Will he risk everything he stands for?

The structure of Firestorm is the film’s biggest obstacle on itself. To put it plainly, there’s too much going on. In essence, one is following two separate storylines. One for our police officer hellbent on bringing down the criminals and one for a recently released member of said criminal organization who has to figure out what his future holds. Both are intriguing, but both are too much for one film to handle. Each one has some solid emotional punches for their characters (although the subplot with Andy Lau and his ex-criminal friend and his daughter was impactful, it could have been emotionally devastating with a bit more time to embellish it), but the film has trouble balancing the two and still making a film that explodes with action. Director Alan Yuen does an admirable job with a majority of the film, but it’s simply too much script, too many characters, and not enough time for it to work with the intertwining stories like it could have.

Outside of that, Firestorm is a fucking blast. Alan Yuen does an admirable job with the action set pieces (although his transitions seriously need work) and the film is populated with strong charismatic actors to pull it off in what little time they have. The film is appropriately diverse in its action too. It has gravity defying fist fights on a platform between buildings, heists, cat and mouse chases, car stunts, and a massive Heat inspired finale with enough explosions and artistic bullet work to make the obvious inspiration, John Woo, blush.

Although I have seen better action cop thrillers this year with better scripts and more impactful writing, Firestorm is still a massively entertaining John Woo inspired romp. It has all the elements of a winning film, it just can’t quite get them to work together in a more cohesive way. If you’re looking for a solid gun fu film though, it’s hard not to recommend Firestorm even with its flaws.