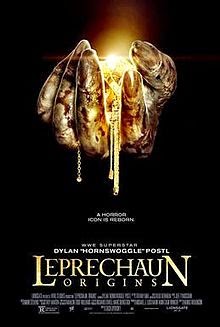 Take it for what it is, but the Leprechaun franchise earned its weight in gold by being more entertaining than good as each additional entry eclipsed the previous in outrageousness. When the decision came through to reboot the long running horror series I can’t say I entirely blame them particularly when the second Leprechaun in the Hood flick came out. That being said, Leprechaun: Origins might actually be the worst film in the entire run. For every element that was ‘so bad, it’s good’ in the previous entries, Origins is ‘so bad, I cry myself to sleep at night.’ Seriously though, what happened?

Two couples on tour of Ireland decide it’s their best interest to listen to a few locals in a small village about seeing the Stones of the Gods on the outskirts of town. The locals are even kind enough to put them up for a night in a remote cabin for the night to limit their trek. Unfortunately, there just so happens to be a hungry and pissed off leprechaun in the area ready to devour them. Talk about un-luck of the Irish.

In many ways, I get the idea of moving this reboot into more serious territory. By the end of the first round of Leprechaun films, it was all joke and no horror. A move back to the horror roots isn’t a fully bad decision. What was a bad decision was making it WAY too serious. For a film about a small village that sacrifices tourists to a man eating leprechaun, you have to give the audience a little room for fun. There is no fun to be found in Origins though. To make things even worse, the film is so utterly uninspired in how it goes about its tale that not only did I predict the entire film 15 minutes in, it didn’t even carry the execution to make it worth my time blurting out loud what was going to happen. There was only one kill in the film worth it as a horror flick and the rest of the ‘chase’ was boring, repetitive, and lacking any kind of tension to keep my attention. I may or may not have decided to do laundry about an hour into the film.

Yet the biggest mistake that Origins makes is that it moves the franchise from a supernatural slasher into creature feature territory. One of the big calls in the marketing was that it would be WWE star Hornswoggle’s time to star as the titular Leprechaun. Not that I know who he was previous to this film, but I sure as hell have no idea who he is after it. Looking like the bastardized child of the X-Files’ Flukie the Fluke Worm Man and a chimpanzee (I think that’s what it looks like, the director does an amicable job at never letting us see or even feel the overdrawn presence of the titular monster with blurred cameras and relentless editing), the Leprechaun sort of shambles around with Predator heat vision – oh yes, it can even see handprints! – and snatches gold before attacking its prey like an animal. So really, this has nothing in common with the entries previous.

Outside of one kill in the film, Leprechaun: Origins has nothing good going for it. It’s cliché, misses out on its monster movie opportunities, stumbles around with no relatable or intriguing human protagonists, and then proceeds to have no fun with its concept. In fact, the movie takes itself so damn seriously that when our main heroine spouts off “Fuck you, Lucky Charms,” in reference to one of the best one liners from the franchise, I was borderline offended.