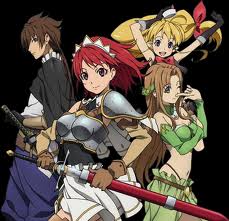 At first I was reluctant to watch this series. Having seen other reviews and knowing it is based on a light novel by Isao Miura I put this series aside for awhile. Well as fate would have it I decided to go ahead and give it a shot, mainly due a very cool pic of one of the characters from the series that I came across in Neo magazine. I am glad I did for I have been pleasantly surprised. While it may not have the strongest characters or story, it still has a lot going for it. It is entertaining to say the least. Chock full of action mixed with a smear of romance, "The Sacred Blacksmith" is a good series by my standards. So here is my review on this medieval romp.

"The Sacred Blacksmith" is centered around the knight guard Cecily Campbell of the Campbell house. While out in the city one day she is called  to action by a strangely behaving man seeking his "salvation". Right from the start we see the many flaws of Miss Campbell. She is not strong enough to stave off the would be attacker and thusly put in the position to be saved by the handsome stranger known as Luke.  Luke has a katana for a sword and after seeing Luke use it so impressively, Cecily insists that Luke makes her one, he of course refuses to do so setting up the romance side of things. While pursuing his craftsmanship Cecily gets involved with a war that has been going on behind the scenes for 40 plus years. From here the story takes us on many journeys. The story itself is a fantasy drama with a little bit of comedy spread throughout. This series is loaded with a predominantly female group of characters, which does have its appeal for a larger audience of viewers. The main male character being Luke does help to even things out as he is a large part of the story. 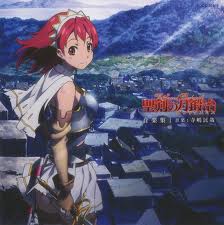 I really enjoyed the side stories throughout the series, my favorite being the Demon Swords mainly Aria. There are several different Demon Swords and all have a part to play in the war. Basically a few of the  Demon Swords can take human form and all belong to a warrior. Ultimately Aria ends up with Cecily and a friendship is formed. 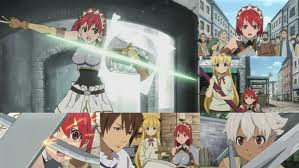 The character development is pretty decent here. We get to see Luke go from the mysterious stranger with a katana to being a potential hero. Cecily is the damsel in distress type character, however she does possess a will like none other. By this statement I mean she puts herself in situations that require her to be saved due to her unwillingness to give up. Which is pretty admirable in a character. As far as the basic story here it is nothing we haven't seen before but then again that can be said for pretty much every kind of genre. From the love story aspect to the man in black side story. It can be fairly predictable but enjoyable none the less.
If you are a big fan of fan service and boob jokes with a couple nude scenes mixed in, then you were not forgotten here. While not over done there is  more than needed to drive home the point. If you are looking for a series that is fun, action packed, and a little sweet in the middle. I would recommend "The Sacred Blacksmith" for many reasons. So do yourself a favor and watch it. Until next keep watching anime!

If you want to check out "The Sacred Blacksmith" or other recommended anime, click on the links below and support Blood Brothers with your purchases!