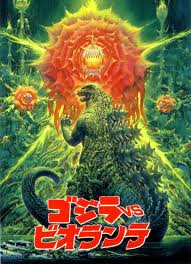 
After successfully rebooting the Godzilla franchise with the darker toned “Godzilla 1985”, Toho studios forged on continuing the second incarnation in the Godzilla franchise (the 17th Godzilla film overall) which is commonly referred to the “Heisei era”. Still it took a four long years to cobble a sequel together in which filmmakers decided to create an all new monster for Godzilla to face off against that hadn’t been featured previously in the original classic “Showa Era” of films. The final results, though not terrible, disappointed audiences with lackluster numbers at the box office. 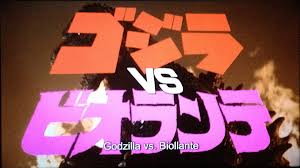 After a quick recap of the ending to “Godzilla 1985”, we open with a scientific team collecting a clump of Godzilla flesh from concrete rubble. It seems scientists want to combine Godzilla cells with plant cells in order to make a super strain of wheat to feed the world. Of course this is a BAD IDEA (seriously why the fuck would they do that?) and they create a new creature called Biollante, a hellish looking plant with alligator teeth that fights the king of monsters when terrorists blast him from his volcano prison.
The plot is just a convoluted mess mixing scientists, terrorists, assassins, and giant monsters. They even throw a psychic girl into the mix to stir the plot into incoherency. I did like the continuation of the darker tone featured in the last film and I dug the idea of a plant based monster, but fans are going to be sourly disappointed by the extremely short battles between our to towering monsters that leads up to a hurried and almost laughable conclusion. 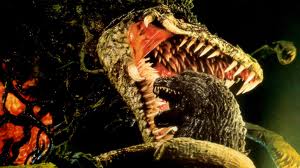 “Godzilla vs Biollante” is a little different than the typical Godzilla film and I do give it credit for that with its unique monster and dark tone but overall this is a disappointing entry into the franchise with its messy plot and short monster battles and audiences agreed with “Godzilla vs Biollante” failing to stomp the compitition at the box office. It also wasn’t even graced with an American theatrical release and it was the last Godzilla film to make a video debut state side for almost a decade. It may not have been the embarrassment the early 70s Godzilla entries were (I’m looking at you Megalon!) but it was dark days ahead for the Godzilla fanchise when it came to entries being released in the U.S.

Feel like you need to see a giant reptile take on a giant reptile/plant hybrid in epic form? You can order "Godzilla vs. Biollante" at the links below! Pick it up on today!