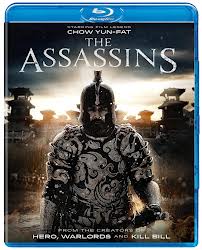 When Well Go USA announced their acquisition of "The Assassins", I was doing my ten second dance party. The reviews, although somewhat mixed, compared it to Zhang Yimou films ("Hero", "House Of Flying Daggers") and when you can make that comparison then you already have my attention. After watching it twice, I have to say that despite its rather oddball way of going about its historical plot and character development I did quite enjoy the film - more or less for some of its visual execution and its more than impressive performances from its actors. It's not quite Yimou quality, but it does try.

With China still divided as a land, Cao Cao (Chow Yun-Fat) remains a steadfast chancellor to the Han throne amid rumors of his plans to usurp the throne. Yet, the Emperor (Alec Su) is hesitant as the four stars align and prophecy states that a new dynasty will rise. He begins to set into motion a plan to assassinate Cao Cao using a strategy set in place a decade before to place well trained assassins (Yifei Liu, Hiroshi Tamaki) close to the chancellor.

Perhaps what makes "The Assassins" such an odd film is how it feels both rushed and subtle at the same time. The focus of the film is most certainly on building an atmosphere around a group of central characters and it does so with some great subtle acting performances and strong visual (but not over the top) style. It takes its time to really let these actors root themselves in their performances and allows them some vague, if not artistic, character dialogue to craft an almost philosophical feeling to why Cao Cao is both a villain and a hero. On the flip side, the film has to significantly rush through some of the historical context and prologue elements to get us to the 'end game' of this assassination plot. I found myself wishing that the film would have taken more time to flesh out some of the lesser characters (Tamaki's assassin, Cao Cao's son) and built up the time span to make the finale and many of its events in the big payoff feel more profound. It feels like too much is cut out for us to really dig into the plethora of characters and many relationships so that the character arcs suffer from its speedy leaps of plot.

At almost 2 hours the film does feel rushed. Perhaps it would have been better suited for a type of mini-series or a film that breached a three hour mark, considering how epic it could have been.

Structurally the film is flawed. These scripting issues and time constraints hinder many of its better elements at times, but that doesn't stop "The Assassins" from being jaw dropping at times. Director Linshan Zhao creates a thick atmosphere with his visuals that really embraces the time period and cold days of the winter before the assassination plots occur. The design of the film is damn near flawless with ornate lush costumes, gorgeous epic sets, and beautiful scenery that really utilizes the Blu Ray visuals I watched for some impressive moments. He uses the camera in unique ways, with some brilliant shots that create character development for Cao Cao with no dialogue or plot devices, and when there are the few battle sequences - he makes them feel epic and brutal. Now the film is definitely a drama and not some full on martial arts spectacle, which is what sets it aside from Yimou in its biggest ways, but the fights never feel out of sequence or added on for the sake of pacing. Visually, "The Assassins" impresses.

To be honest, this film is truly a vehicle for Chow Yun-Fat to strut his acting prowess though. Initially one is to believe that his character is the villain, but the film and Chow Yun-Fat do an amazing job adding shading to a character that could have easily been very black and white. Although he is not the 'true' protagonist or antagonist of the film, his performance had me on the edge of my seat - wondering just what his character was up to and whether or not he was planning to overthrow the Emperor. That speaks something when he steals the film as essentially a secondary lead.

I was hoping to be blown away by "The Assassins", but alas it was simply a strong visual and performance driven film. It's flaws in script and structure hinder it from reaching the heights that many other films of this ilk reach, but it does contain one of my favorite Chow Yun-Fat performances and an atmosphere thick enough to slice a sword through. It's far from perfect as it struggles to balance its multitude of characters, historical setting, and entertaining film pacing, but in the end I was impressed enough to give it a full Blood Brother recommendation.

Fan of this epic historical style? Perhaps you just want to see Chow Yun-Fat rip up the screen again? Either way you should click the links below to order your copy of "The Assassins" which debuts in the US on DVD and Blu Ray January 8th, 2013 from Well Go USA!