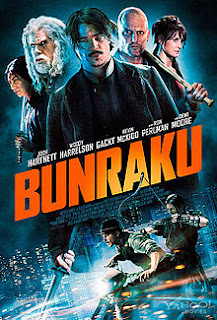 "Bunraku" is one of those films whose impressive fall from grace had me even thinking that it had to be crap. The critics spit on it, the distribution went straight to home video, and no one I knew even thought about seeing it. The idea intrigued me, but for all of this shit to rain down on it the film simply had to be bad. When I received a request to review the film, I thought I might as well make a snack, pop out some root beer, and see just how bad it was.  Maybe it was the low expectations going into the film. Maybe it was the mood I was in when I watched. Whatever reason one could excuse my opinion with, the fact remains that I loved this fucking movie. The story might have been cliche and shallow with some overly overacted performances, but it felt like that was exactly how it was supposed to be and with its ambitious style and quirky combination of genres - I had a damn blast watching "Bunraku."

The world has succumbed to its own violence and hatred. After a devastating war all but annihilates the human race, the small pockets of civilization outlaw guns but that doesn't stop the corruption and violence from leaking its way back out. That's when a lone cowboy drifter (Hartnett) rolls into town. He's out to look for the tyrant Nicola (Perlman) and take him down from spreading his fear and iron fisted violence. With the help of a fellow wandering samurai (Gackt) hell bent on justice, the two will find allies in the town to help them succeed in toppling the man who has taken something from each of them.

The concept of "Bunraku" was enough to sell me. Done in the style of 'bunraku theatre' (a type of Japanese puppet storytelling), the film combines a plethora of genres into one ball of stylistic balls out action. A little western here. A little samurai revenge film there. Some film noir for narration sake. Even a bit of comic book style just for shits and giggles. The style is seriously through the roof. It's lambasted in this weird almost origami like set design with fluid colors, folding edits, and weird sweeping cameras that really just pour on flair. Director/writer Moshe knows how to make things look interesting with his knack for camera tricks and outrageous concept designs and he layers "Bunraku" with them. The action is pretty top notch, with note for the odd flamboyant killing style of Killer #2 and a jail house break where Hartnett uses his one-hit-knock-out punch to lay out a couple dozen guards, and it just makes "Bunraku" a true spectacle to behold visually.

The problem with the film occurs in the depth of its script. With so much focus on the quirkiness of the characters and the ridiculousness of its visuals, the film tends to forget that it has characters that we need to care about. The Drifter remains a little too subtle and undeveloped, the bartender tends to be used too little, and our samurai has too many of his unique concepts shoved aside to be as interesting as he should have been. The plot is your pretty basic revenge plot where are heroes must overcome your basic love lost/family disgraced angels at the hands of a larger than life villain who in this case where's Gandolf clothes and carries a big axe. I desperately wanted there to be more to the plot. More to the growth and pay offs for each character, but I rarely got it. The film has to move at a lightning pace to get it all in to begin with and too often it forgets to let us see the humanity of this over the top world for us to care.

That being said, "Bunraku" was a fucking blast to watch entertainment wise. The style had me with my jaw on the floor and the action was the edge of your seat kind that really slathered on the ridiculousness of the concept. I loved the idea of a cowboy with no gun and a samurai with no sword having to team up to defeat "the system" of a modern world too corrupt for its own good, even if the actual film itself rarely lived up to its own concept. This is a film mostly for those looking for a unique film watching experience or looking to be entertained for a few hours, not one that's going to earn any kind of real accolade. Still recommended despite some serious flaws.

If you want to experience the unique world of "Bunraku", all you have to do is click the links below and purchase it yourself!