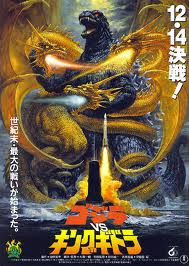 
With “Godzilla vs. Biollante” failing at the box office, Toho officials wisely decided the next entry into the “Heisei Era” of the franchise was to feature a recognizable foe from the original series, and what better than the ultimate Godzilla villain. That is of course King FUCKING Ghidorah! Yes that three-headed golden bastard makes a much needed return and his presence, mixed with an enjoyable and nifty storyline makes “Godzilla vs. King Ghidorah” one of the most entertaining entries into the entire franchise. 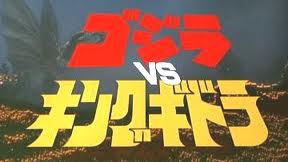 The film opens with in the 23rd century with a sub discovering the body of King Ghidorah (minus 1 head) deep in an ocean trench. Jump back in time and a UFO lands in 1992 Japan. The inhabitans are from the future and come back to warn how Japan will be destroyed in the future by Godzilla. They convince some scientists to travel back in time to 1944, deep in the heart of the raging war in the South Pacific. They kill the dinosaur that was to later to become Godzilla thanks to a nuclear blast, and in it’s place leave three bio genically made pets. Problem is these things mutate into King Ghidorah. Now in 1992 the Japs need to mutate Godzilla in order to fight King Ghodrah… but now they have to deal with Godzilla! They are fucked either way as no matter who wins, they lose.
The plot, as one can tell, is a little convoluted and mega cheesy with a bunch of science fiction plot devices clobbered together. Giant monsters, time travel, UFOs, androids and bio-engineered pets. Even with all these plot devices ramming into each other at warp speed, it still doesn’t hurt the overall enjoyable nature of the film. Remember we are watching a Godzilla movie so a suspension of disbelief is in the cards whenever viewing. The special effects, for the most part, are excellent. As in as good as a guy in a rubber suit can get. The English actors in the film, however, are atrocious with the dubbing even worse, with dialogue seeming written by a teenager.
It has its problems but overall “Godzilla vs. King Ghidorah” is an extremely enjoyable entry into the mile long series. The plot is a little over-complicated but at the same time it’s nifty and inventive. That mixed with plenty of destruction and legendary giant monster battles ensures any Godzilla fan is going to love this entry. There’s plenty of good here to outweigh the bad, especially the cornball running Android sequences (trust me, you’ll laugh at these scenes as much as I did.)

Godzilla will return in “Godzilla and Mothra: The Battle for Earth”.

It's an epic rematch in this 1991 tale of "Godzilla vs. King Ghidorah"﻿, but you can get it in a double pack for wicked cheap by clicking the link below!