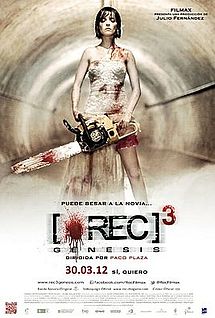 After "[Rec]" tore me a new one with its simplistic take on the zombie genre, I was ready and willing for the franchise to take off. Even after the rather mixed feelings of "[Rec]2" and the ballsy moves it took the series, I felt like this was a film series that was destined for greatness with clever writing and strong execution. After watching "[Rec]3" a few times, I'm not so sure I buy into that ideology anymore. Not that this third entry into the Spanish zombie franchise isn't a solid one as it definitely has its moments, but the slide into mediocrity for the franchise seems to be quickening as "[Rec]3" rarely feels as clever or strongly executed.

Koldo (Martin) and Clara (Dolera) are about to celebrate one of the best days of their life: their wedding day. It's all going to plan too. Huge amounts of friends and family show up. It's being held in a massive church with all of the fixings. Including a few "infected" individuals who are ready to take a "bite" out of life. With hell breaking loose at the wedding and enough zombies to shake a stick at, the two love birds will have to find each other and find a way out of the quarantine before they come down with a bad case of the "zombies."

There were two things that really took me by surprise with "[Rec]3." Firstly, the film is not entirely "found footage." After an initial rally of hand held footage to kick off the wedding (and the initial chaos of the infection spread), the film does something that no other "[Rec]" film has done...it becomes a traditionally filmed movie. No hand held found footage. It becomes like a regular zombie film. I know that I'm the black sheep on this one, but I kind of felt like it was a cop out. What made the previous "[Rec]" films such a blast for me is that they took this highly "trendy" style and they made it great. They cornered themselves with this artistic choice, then they found ways to make it really creative without catering to the flaws of the visual style. I was expecting the same with "[Rec]3." That they would find some new and clever way to make it work, but then it kicks to a traditional filming and, honestly, loses some of the punch it might have had. So right off the bat, I felt the film pulled away from what made the first two strong films.

Secondly, "[Rec]3" then takes an "Evil Dead 2" approach to the entire matter. It injects quite a bit of ridiculous comedy into the mix. I wouldn't go as far to call it a zom-com or anything of the like, but it really does grab the outrageousness of the situations and throws the tongue into the cheek. Again, I felt like this deviation from the formula of the franchise was a miss. Not that I don't like some humor in my horror, but often enough it feels a bit forced for its own good and the one over the top sequence I was looking forward to, the wedding dress clad chainsaw wielding bride, was massively underused.

When the horror hits, it does come off nicely. I loved some of the new details to the mythos of the franchise particularly with the reflections of the zombies and how they react to the Biblical text and I definitely felt like there was some great shock moments with strong special effects to go with them. Unfortunately, "[Rec]3" tends to fall into far more generic moments then I would have hoped. For a regular zombie film, this Spanish one would be a strong contender with its quirky humor and penchant for extreme violence. It just happens to be in a franchise of other smart and impressively executed films.

So the final word I have on this film is this: it's fun and has its moments, but "[Rec]3" fails to inspire the same reactions and strong personality that the previous entries held. Zombie fans are sure to love the film overall, but it's hard not to be underwhelmed with it too.

If you want to complete your "[Rec]" collection or just feel that you need another solid zombie film for your collection, then click below and pick up your copy now!