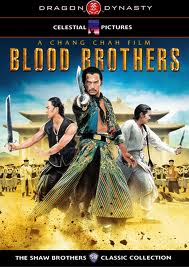 From this era of martial arts films and more specifically from the Shaw Brothers studio, I'm a sucker for anything that has Chang Cheh's name attached to it. Partner that with fight choreography by Lau Kar Leung and a dynamic three way headlining cast featuring Ti Lung, David Chiang, and Chen Kuan Tai as the titled 'blood brothers' and this should be a film that would define the era. Although its not quite the rip roaring brutal throw down that I was expecting, "Blood Brothers" is a film that utilizes strong storytelling and pretty impressive performances to build a very epic tale that will have kung fu fans in a frenzy.

Two bandits (David Chiang, Chen Kuan Tai) happen upon a very determined man (Ti Lung) who tells them about his plan to dominate some other bandit groups to obtain greater power. The three of them pose a formidable martial arts force and quickly rise to the next level. Tensions rise between them as the wife of one of our original bandits begins to fall for our determined Big Brother and vice versa...and when their relationship threatens to derail Big Brother's plans for more power as a royal official, the outcome of their personalities might explode.

"Blood Brothers" relies heavily on the performances from it's three stars to work. The story is fairly complex for Shaw Brothers standards actually occurring in a flashback way that leaps from the present, where David Chiang's character is telling why he assassinated a royal official, to how the three men came to be cohorts in a struggle for power. This, where the plot's focus is on character interaction, is where "Blood Brothers" shines. The combination of our three male leads and the romantic triangle featuring Ching Li is a pretty riveting tale in it's own regard. The performances are impressive and how the plot unfolds definitely works its way into one's emotional traps too. For a Chang Cheh film, whose known for his violence and often over the top moments, "Blood Brothers" plays it relatively low key here and it can work.

Perhaps my biggest issue with "Blood Brothers" occurs in it being a "kung fu film" more than it's narrative storytelling. Although there are plenty of fight sequences spread throughout, most of them feel somewhat irrelevant. They make sense where they are at and within the plot progression, but they lack the dramatic flair that the rest of the film cakes on. The fights are strong with great choreography, but when it needs that intensity of emotion (the assassination sequence) they fall flat. It's rather frustrating at times and something I felt I would never say about a Chang Cheh/Lau Kar Leung combination.

"Blood Brothers" was a much better 'film' than I anticipated with its strong acting and great dramatic storyline, but when it comes to being a Chang Cheh kung fu flick - I was a wee bit disappointed. If anything, it is certainly a reminder of the strong chemistry of Ti Lung and David Chiang and it showcases their true acting talents. Outside of that, it tends to be mediocre at best with many forgettable fight scenes.

You can always judge for yourself though! "Blood Brothers" is available in a ton of ways when Arc Entertainment was distributing Dragon Dynasty films, but here is a link for the single DVD of the film and it's pretty cheap!