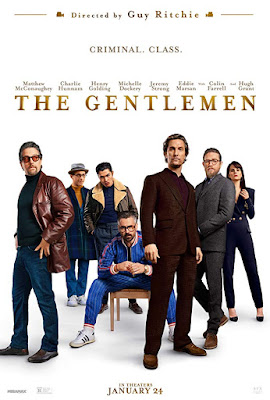 Sometimes you can go home again. Guy Ritchie once again drops a film in his signature genre, the British gangster film, with a lot of his signature style and dialogue. Different now is the pace, no longer the breakneck sprint of Snatch, The Gentlemen has the intentional pace of a more tenured filmmaker, confidant enough in his story to let it breathe. Tying into the story as well, there is the idea of growing older and balancing modernization with maintaining what has worked until now. In its way, this is really good and leads to a pretty enjoyable movie overall, though not everything in this situation has aged especially well, unfortunately.

The Gentlemen has a bookending story involving Fletcher (played with great and entertaining zeal by Hugh Grant), a scumbag PI that makes Jake Gyllenhaal in Nightcrawler look downright socially acceptable, telling a story to Charlie Hunnam’s Ray. It’s a story about Ray’s boss that’s supposed to climax with a reason why his silence should be worth $20 million pounds. Ray’s boss is Mickey, an American crime lord who has completely cornered the weed market in London. I can’t imagine why they cast Matthew McConaughey to play that role, but he does so with his typical low-key yet highly charismatic persona. “In the jungle, the lion survives not by acting like a king… but by being a king,” is the first thing we hear from Mickey, and he certainly lives up to that concept. He’s trying to sell his empire to Jeremy Strong for a staggering price, but rival Henry Golding manages to attack one of the secret farms in his own effort to enter a lower bid for Mickey’s staggerleaf kingdom. As with a usual Ritchie film, there is quite a roster of unique and interesting characters each with their own personalities and quirks including a notable Colin Ferrell as a deeply reluctant but effective muscle merely repaying a debt.

The strengths and weaknesses of this film are both in the writing. For every moment of truly inspired verbal sparring, including a scene between Fletcher and Ray involving outdoor barbecues and wagyu beef that I found especially funny, there’s an awkward one. A conversation about the racist qualities of a particular statement is just uncomfortable. Especially as it’s an old white man correcting a young black man about how a statement wasn’t offensive. I wasn’t particularly offended, nor do I think others would be per se, especially in the dual contexts of it being foreign sensibilities and being about morally repugnant people anyway… but it is uncomfortable and happens fairly frequently. With every conceivable race that would be in a stereotypical London crime world. I don’t want to spend much longer focusing on this because it’s not a huge factor in the film overall, just one of those things that smacks of the edgy writing of twenty years ago and just doesn’t have the same place in the modern film space.

Allow me to step off of my soapbox, however, to say that this movie absolutely bleeds visual style. From shifting aspect ratios during a conversation about aspect ratios to a straight-up music video in the middle of the movie, everything about it is visually exciting and thrilling with never a clue as to what will happen next. Fletcher tells an out and out lie and gets called on it? Cool, we’ll just replay the scene in a typically less interesting way. Badly overdubbing spy camera footage of an illicit meeting. There is always some new fun gimmick, and that does make the movie breeze right by. The movie may not have completely scratched the itch it was aiming for, but it makes an earnest, Herculean effort. Guy Ritchie does still have it and I honestly believe we are going to get at least one more truly great movie out of him before his career reaches the same comfortable retirement Mickey is seeking in The Gentleman. Unfortunately, this isn’t quite it.

The Gentlemen is certainly not a wasted ticket and I can think of movies in cinema right now that are a much worse way to spend a couple of hours. Not to mention this film more or less mockingly flies in the face of January being a cinematic dumping ground (though that becomes less true by the year as the cinema year drops more bangers in traditionally slow seasons to not have to survive the Royal Rumble of summer releases). All in all, a slightly above average effort.