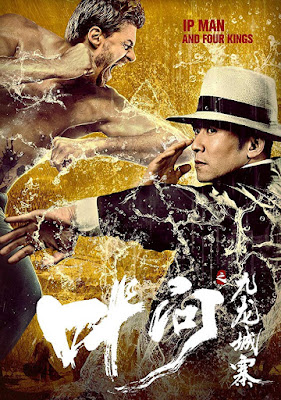 With the continued international popularity of the Wilson Yip/Donnie Yen Ip Man series, so too is there continued popularity by film companies to cash in on it with their own Ip Man properties. To this point, there have been a handful of films that have done their brand of Ipsploitation well, including The Legend is Born and The Final Fight, so it was only a matter of time before we got our first perplexing addition to the genre. Of course, this is in reference to Ip Man and Four Kings. Using the Ip Man character, this film is essentially a stand-alone kung fu flick with little in the way of depth and thoughtfulness. It’s a silly film, an easy way to burn through 77 minutes (with credits), but it’s one that is thinly written and looks rushed to capitalize on the release of Ip Man 4. Don’t confuse them because, quite frankly, this one is a chore to sit through.

There is certainly a difference in budget between the official Ip Man franchise and many of the other films – not including Wong Kar Wai’s artsy big-budget The Grandmaster, but when it comes to Four Kings, it’s blatant. The film looks like it was made for mainstream Chinese TV and outside of a few key visual moments (director Fu Liwei loves to use big bold shadows and backlighting) it looks and feels like a cheap knock off. The editing is haphazard and the secondary performances are never in sync with what the film is aiming to do. The rushed nature of its tone means that most of the plotting is either underdeveloped or completely dropped at times, leaving any kind of emotional resonance hollow and forced. Reveals to the identity of the titular Four Kings only come in the second half and Ip Man’s journey to find and fight them seems completely irrelevant by the finale. There is a ton of promise in the formulaic martial arts blueprint of a script, particularly with the Four Kings, but none of it seems a priority. The priority feels as though this is a film sprinting to just wrap up and get released.

Fortunately, Ip Man and Four Kings isn’t a complete train wreck. It’s entertaining enough in its simplicity and it has a back to basics martial arts approach with a few fun fight sequences that might have been pretty stellar had the editing not cut up so much of the work. There’s a great fight between Ip Man and the evil henchman that ends up on a table with a ladder that is used for some fun beats and, while too brief, the fights with the Four Kings are fun – even if they never capitalize on the different styles of each in a way that truly soars. It should also be mentioned that Michael Tong is pretty solid in the title role. It was a bit confusing at first since the film doesn’t refer to him as Ip Man and instead as the alternate version Ye Wen and his big speech about why martial arts are important is poorly timed as it talks about how Hong Kong will always be inseparable from China (the propaganda is thinly veiled in this one) but his performance is solid which is great for the film to anchor on.

In the grand scheme of Ipsploitation, Ip Man and Four Kings is definitely a low point. It’s the most obvious one I’ve seen in terms of feeling like a cash grab and it doesn’t have strong enough execution or thoughtful scripting to be more than a formulaic martial arts movie that just happens to have Ip Man as its protagonist. It’s hardly a huge investment of time, running at an incredibly brisk 75+ minutes, and there are a few things to enjoy, but mostly it’s a lot of undercooked ideas stuffed into predictability. If you’re looking for more Ip Man, make this one a last resort.