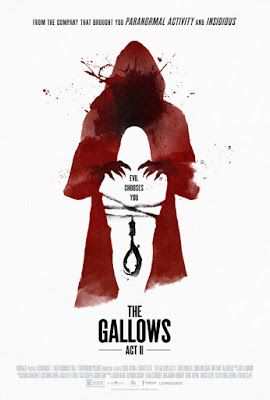 It was only back in 2015 that The Gallows solidified how much that found footage horror needed to slow down as a trend to be re-evaluated by more creative forces. It was a film that, in my humble opinion, represented essentially everything wrong with the sub-genre. It was thinly scripted and simply goes through the motions of its style and narrative. Nothing fresh. It was, worst of all, boring. Imagine my feelings when the trailer for a suddenly revealed sequel, The Gallows Act II, ended up in my feed online. Considering how The Gallows only cost $100K and ended up grossing $40 million plus, it wasn’t a reach. I’m a self-proclaimed franchise fanatic so it was only going to end up seeing the film, but I wasn’t fuckin’ happy about it. Truthfully, it could only be better, right? Where else can a franchise go but up when it starts off by hanging at the end of its own noose? It better go up. If it doesn’t, woof.

The Gallows Act II, bonus point for the ridiculous title, follows a high school actress desperate to make a splash with her talents in her new school. She is also trying to get her personal YouTube channel to grow. Kids, man. This is the point where she finds out about the titular play, The Gallows, and the online “Charlie Challenge” and she decides it could solver her problem for a great monologue for her audience and be something to add to her channel. Once she starts reading the play though, a hooded executioner starts haunting her and other weird things start to happen.

The foundational script for The Gallows Act II is, like its predecessor, a messy ordeal. The film attempts to be a lot of things all at once – a true sequel bringing back a character from the original for a cliché investigation sequence, a traditional teen ghost story that parallels teen anxieties with paranormal occurrences, and, in the most bold choice, a self-referential film to many of the elements of its predecessor. Let’s save that last one for later. It’s the first two approaches to the film that tend to cripple what Act II has to offer. Mainly, the film is incredibly predictable and formulaic. Our heroine struggles with trying to fit in with her new school, there’s pressure about success and her future, and suddenly one of the hunky boys in the school takes a very big interest in her. It’s high school horror 101. Her deluge into the ghostly world of The Gallows comes originally as an answer to her problems, but the subsequent body count and her own breaking psyche only exacerbates her situation. As a theater kid, she should know better about fucking around with luck and superstition. Shame on her.

The strangest part of its script though comes in the final reveal of the film. Now, it’s tricky to talk about something that is such a massive spoiler, but I’m tempted to discuss in full because it’s so incredibly random. The third act goes through the usual motions, but there is a key moment in the final minutes that is so outlandish it honestly took my final score down a half point. It’s such a baffling choice, that I left my copy of Act II out to re-watch because I feel like I must have fallen asleep at some point without knowing it and missed an entire subplot. It’s bold, but does not work.

Now it’s time to reference my point above about how Act II is something of a meta-film. The opening sequence of the film is a group of young people doing a version of the Charlie Charlie Challenge. This is a reference to the marketing for The Gallows where Blumhouse and Universal used the explosion of the viral challenge utilizing pencils to answer questions in ghostly ways as marketing for their film which featured – you know it, a ghost named Charlie. Act II takes it a step further by creating its own ‘Charlie Challenge’ with reading the play and having ghostly incidences happen. The film also starts as a found-footage horror, with the same kids filming the challenge via their phones, but the film – very smartly – abandons the style for a more traditionally shot film. It’s a great choice because this allows returning directors Cluff and Lofing to add a lot more artistic elements. While they showcased some intriguing atmosphere in the first, they fully embrace the ability to play with visuals here. There are some solid scares, there is great use of lighting, and they are not chained by the constraints of found footage for many bigger sequences. One in particular, where our heroine’s sister encounters ‘the hangman’ has a fantastic throwback style to the classic era of Italian horror. No kidding. It’s as if the directors and writers had heard the criticisms of the original and made a few corrections to allow themselves some breathing room to showcase some intriguing choices.

All in all, while The Gallows Act II is not a great horror film, especially in a year like 2019, it is a solid step up from the first film. It suffers from another messy script that is trying to juggle a lot of different focuses that is both muddled and predictable which is a feat in itself, I suppose. It does, however, make some great choices in fixing what misfired in the first film and the biggest choice, to abandon the found footage approach, allows directors Cluff and Lofing to inject some fascinating visuals and great ghostly scare moments. It’s going to end up being left behind as horror has moved away from the teen-focused material to more adult-oriented themes, but it’s just intriguing enough that anyone who liked the first film should check it out. Although the film was oddly dumped to VOD and home video without a theatrical release (did I mention the first made $42 million?) I hope that we get The Gallows: Final Act. With the distance crossed by this film, a third one could potentially save the franchise from its own hangman.