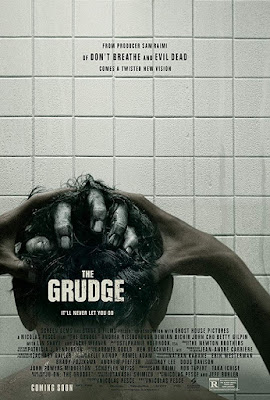 There’s a moment in The Grudge where a loving husband and father-to-be real estate agent, played by the vastly underrated John Cho, hesitates outside of the cursed house at the center of the film. Nothing in particular is there, no ghosts or sinister shadows. He looks around at the semi-desolate street in front of the characteristically part gothic home and begrudgingly moves to go in. It’s moments like these, caressed in the heavyweight of an existential dread knowing something is wrong with no clear indicator to what, which makes The Grudge franchise so timeless. It’s a franchise that is fairly well known around the world. It took Japan by storm with a variety of series from TV to reboots, but a 2004 remake starring Sarah Michelle Gellar, produced by Ghost House (Sam Raimi and his crew), and directed by the original writer/director Takashi Shimizu is what many people in America will remember. Yes, that remake had a couple of ill crafted sequels that hardly capitalized on the tone indicated in the scene above, but the series has lived on nonetheless.

This time Ghost House aims to reboot the series in a fully American manner with the stylish hand of horror up-and-comer Nicolas Pesce in the director’s chair. The strangely titled The Grudge is, surprise-surprise, a sly sequel to the 2004 remake of the same name. This film sees a woman investigating the house in Japan who unknowingly brings the curse back with her to the United States, setting into motion another omnibus of woven stories about a haunted home that kills whoever sets foot within its doors via a ghostly family.

If you’re a horror fan than the core concept of 2020’s The Grudge will certainly seem very familiar. It’s one of those films that rests precariously on a line. It aims to be true to its source franchise, but at the same time add something new and fresh – such as a fully American setting – to make it stand out too. The main problem that arises from this approach is that, oddly enough, the film is not enough of either to be truly distinctive. Narratively, it’s quite true to the Shimizu style of his original series, jumping through time to weave together a few separate stories about the same house and its eagerness to devour trespassers. It plays things loose at times, but not nearly as vague and puzzle-like as the original Ju-On. It uses its structure of a detective (Riseborough) investigating the house to keep the audience invested, but it doesn’t over-explain like so many American horror remakes of foreign franchises love to do. What it leaves behind is a film that never finds a way to gel the two ideologies together in an effective way. It lacks a sense of unique identity in its writing and it ultimately comes out underwhelming. It’s too much like its predecessors but adds just enough interesting ideas that it leaves the audience wanting more of that.

With that said, there is still plenty to admire about The Grudge. The surprising link the 2004 remake will appease fans of that film and it’s obvious that Raimi and Pesce love the original films and aim to do them justice. In fact, it’s director Pesce that really makes The Grudge work. He takes his excruciating time with the key moments of dread, Americanizing the ghosts with more visual goo and viscera to punctuate the scares (although the highly-touted “R” rating is not nearly as dramatic as the marketing would lead you to believe,) and he embeds the film with his own quirkiness that made his two previous modern genre classics – Eyes of My Mother and Piercing, such distinctive works. This film is much safer than his previous two, but his style is there even if it’s more subtle – like the yellowed stain glass window or how all of the TVs are weirdly old.  With a relatively stacked cast, of which I haven’t even mentioned the perpetually smoking Demian Bichir, an incredibly creepy role for Lin Shaye, and a great small role for William Sadler, The Grudge does have its merits that make it a worthy addition to the series.

All in all, 2020’s The Grudge never quite finds the balancing act. When it’s good, it’s incredibly effective horror that draws out its sense of impending doom with subtle artistry and then pops its audience with a bit of violence or gore to get a rise out of them. The problem that undercuts its strengths is a script that never finds a way to make the omnibus approach to storytelling as interwoven as it might have been – or even all that surprising. If you’ve seen the other Ju-On/Grudge films, you already know where most of this is going so that its refreshed setting and group of characters don’t leave much to resonate later since it is mostly rehashing ideas and story elements from previous Ju-On films. I will admit, as a huge fan of the franchise, I think there is more to this film that repeated viewings might bring to light in how Pesce uses subtle details. As is, while the film does remain true to the franchise, it’s not the spark that was needed to reignite the sense of pure dread in its audience. Like John Cho’s character in the previously mentioned scene, there is a sense that something is slightly off about The Grudge, but nothing immediately seems problematic. It’s an enjoyable entry to the franchise and a decent way to kick off the year in horror.