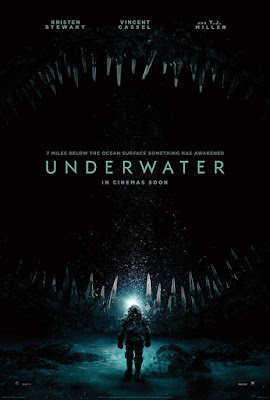 Underwater is a fascinating movie to try and review critically. In a lot of ways, it’s a deeply problematic script and a movie out of time, but it’s also handled very deftly with supreme direction, acting, and cinematography. It’s a disaster movie and creature feature all smashed into what is ultimately a harrowing, breakneck couple of hours at the theater.

The streamlined plot starts with Norah, very adroitly played by Kristen Stewart (who I normally like anyway, but is notably acting a step up from her normal “Prozac” energy level) in a deep-sea control platform for a nearby giant drill. This is a sci-fi concept, and deeply a sci-fi movie, in equal measure to its horror and it is a big pill to swallow early on. If you decide you’re along for this ride from here, however, it doesn’t ask for a much deeper suspension of disbelief, as the station inevitably starts buckling, collapsing and imploding under the unimaginable pressure. From here, Underwater is in nearly all ways a disaster movie and is internally consistent throughout. The stakes and danger are made immediately clear as she gathers other survivors and they face things like having to walk in really cool looking futuristic pressure suits on the seafloor, and the film is very explicit about what happens if the suit fails. Everything is collapsing behind them, driving the characters and plot ever forward as they head to the drill itself, in hopes of finding functioning escape pods.

The group, notable in its inclusion of TJ Miller providing dry comic relief, Iron Fist’s Jessica Henwick as the terrified research assistant, and Vincent Cassel as the haunted captain, all put in really solid performances and the practical costumes go a long way in making this movie feel grounded. They all play the situation with a deadly seriousness. Also, the camerawork is simply phenomenal. A lot of tight, solid shots that give everything a deeply claustrophobic feel, which the film uses to its credit. If it rips anything off of Alien especially well, it’s the helplessness of the situation. There is no one coming to save them. It’s not even a distant possibility.

Notable in the review of this creature movie so far is that I haven’t mentioned the creature yet. Interestingly, at this point it’s already a really compelling disaster film, there’s a little corporate menace, and there’s definitely an active threat in an already dangerous environment so the sudden appearance of the monsters is a real kick in the pants for our hapless survivors. Now, I personally find the creature design a little on the uninspired side, but they’re sufficiently threatening, incredibly quick, and once the movie starts adding the horror, it never relents on it. It’s mostly jump scares, but a jump scare in an already tense and threatening scene and scenario is a refreshingly effective use of them. I do think there are some unfortunate third act missteps that I won’t spoil here that keep me from loving this movie, but on the whole, the plot is satisfying and definitely tense.

Among the other things that are less great, this definitely feels like two screenplays fused together and not especially well. Also, for every positive thing I said about the movie I can point to a line of dialogue that is just bad. The actors are acting the crap out of it, and the net effect works, but the dialogue in and of itself is just flat. Also, again, the monsters themselves are just not interesting looking. Very much in the “clawed mercreature” archetype, it was kind of a bummer in a movie that’s otherwise so cool looking. It is threatening, however. Fast and insanely strong, it darts around in the darkness of the ocean floor and does spice up an already brutal survival scenario.

There is no aspect of Underwater that is especially new, but it is a familiar tale told with some excitement, some definite style and with some real thrills. It’s a breezy couple of hours of escapism, and though it lacks any themes much deeper than “Underwater drilling is bad” and “corporations are evil” it’s still definitely worth the price of admission.