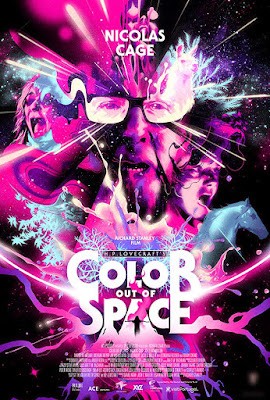 Famous horror author, and extremely racist even for a turn of the century American man, HP Lovecraft was disappointed by the lack of the truly alien in horror and was inspired to write what is arguably his most famous story, The Colour Out Of Space. His most adapted work, it has been made into movies as disparate as Die, Monster, Die! and Die Farbe (The Color) and even directly inspired the Stephen King novel, Tommyknockers. What is it about this story that’s made it work for so long and adapt so well? Lovecraft’s stated goal: a truly alien threat.

A family farm is struck by a meteor that defies the laws of physics and radiates a bright otherworldly color. Soon the crops all begin to grow large and grotesque, tasting horrible, while animals start to become aggressive and mutate, and the family all slowly starts to go insane… all while implying that something intelligent, or at least conscious has taken up residence in the well. That’s the book’s basic set up, and from that spins this new take on Color Out Of Space, Richard Stanley’s first major film since his famous replacement on the ill-fated but fascinating dumpster fire The Isle Of Doctor Moreau. He further challenges himself by casting Nicolas Cage as the lead. A brief aside, I’ve always been of the belief that you don’t cast Nic Cage in a movie, you unleash him on a movie and if that movie is strong enough, he’ll improve it exponentially. If not… well, we’ve all seen the supercuts. I am happy to report, in this instance, Cage is an extremely welcome addition.

In this version, we are introduced to the Gardner family, fairly recent transplants to a rural community west of Arkham. Cage’s Nathan is an amateur farmer, specializing apparently in alpacas - the source of almost all of the intentional comedy of the movie. He has a day trader wife, Theresa, Wiccan daughter, Lavinia, stoner son, Benny, and young Jack. The motions are basically the same: a meteor drops from the sky onto Nathan’s front yard and starts to affect everything around it. In this film, it’s an excuse for some really fun creature effects, and some really… computer effect looking computer effects.

I would say that this film accomplishes its goals by and large and, thus, Lovecraft’s by extension in how the threat feels unnatural and alien. Even the middling CG is well used to this particular effect. There is a lot of atmosphere and tension, some of it in the form of communication difficulties as technology wigs out, some in the form of a nigh possessed Jack staring at the well, talking to something no one else can see or hear at first. Nathan and Theresa fall victim to brutal screaming rages out of nowhere. Everything about this movie is weird and uncomfortable, including the humor which is more prevalent than you’d expect. For what it’s worth, my screening of this movie had the type of Cage fans that were literally laughing at his every line, and while I respect people’s right to enjoy something in their own way, it did detract from my personal experience of seeing the movie because Francis Ford Coppola’s nephew is doing some really good work here. His dad jokes are on point, and his slow descent into madness is actually more subtle than we’ve come to expect after films like Mandy and The Wicker Man. I thought it gave the whole film an even more uncomfortable feeling because no one in this movie really goes murderously psychotic, it’s a more believably weird kind of insanity.

I don’t have much in the way of complaints… there is the surveyor character, who is the perspective character of the novella but is more the audience surrogate in this, despite being in maybe a third of it. Also, Tommy Chong mostly makes a cameo appearance, taking over for the farmer character being interviewed by the prospector in the original. Neither is bad, but both could’ve been easily excised to tighten up the run time a bit. Also, I mentioned earlier that the computer effects in this movie are by and large noticeable, to put it kindly, they’re awkward and noticeable. It wasn’t enough to ruin the experience for me, and I still found this a largely tense experience, but I mention it because it looks notably unpolished in the era of Marvel.

If it’s not completely clear, however, I’m really digging to find objective things to complain about. Even subjective ones, really. Truly I found this movie immediately captivating, and it was overall too soon. I can say, unabashedly, that I cannot wait for Stanley’s currently announced follow up, this time tackling Lovecraft’s The Dunwich Horror… if it has a quarter the style Color squeezes out of a hundred-year-old short story, it will certainly be something to behold.