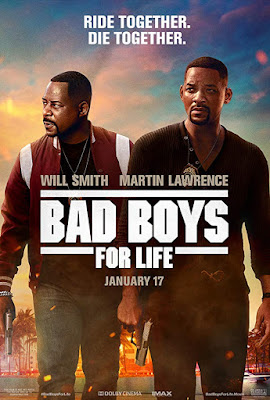 What do you get when you take a Michael Bay property, remove the man himself and take a swing at making a 90s style action movie in 2020? Bad Boys for Life, apparently. Impossible to talk about without at least touching on the originals, Bad Boys as a franchise is a Smith/Lawrence police action franchise. Smith is Det. Mike Lowrey, a trust fund baby who is a cop because he likes killing people. Martin Lawrence is Det. Marcus Burnett, a guy who’s a cop, apparently, to make Mike happy and to avoid his wife, Teresa, who’s only character trait is that she’s a nag. The first movie concerns identity confusion between the detectives who we had just met in a plot that would be embarrassing in a third movie, and the second (although better) does involve Mike and Marcus and some SWAT guys declaring and committing open war on Cuba. Your mileage may vary, but I’ve never liked these movies. Decently shot action and a collection of homophobic and race jokes that were awkward even in the era.

For Bad Boys for Life, we open up on Mike and Marcus rushing to the hospital to witness the birth of Marcus’ first grandson. Once again, Marcus threatens to retire, but this time with real conviction. During the celebration, a public attempt is made on Mike’s life. He takes two bullets, and while in the hospital, Marcus makes a deal with God not to bring any further violence into the world if Mike survives. This brings around our necessary “Marcus is reluctantly involved with the case” subplot for the movie, as Mike hops back up, eager to find the man who threatened his “bulletproof” status. That man turns out to be Armando, son of Isabel, a mysterious criminal from Mike’s past who wants revenge.

From this point, the movie introduces us to AMMO, the young unit of tech-savvy police, leading into the inevitable scenes of Mike and Marcus showing the young kids some old school tricks, while AMMO teaches the old dogs a few tricks of their own. Well, at least, that’s the promised set up. Largely, AMMO is effectively the detective Lowrey/Burnett fan club, especially Venessa Hudgens, who despite her young star power is pretty strictly relegated to the role of a girl who appears after every set piece to say “Wow, they’re sooooo cool!” That is, except Rafe, the guy who is cynically over the Bad Boys before he even meets them, played with obnoxious, cringe-worthy energy by Charles Melton. This addition to the basic formula makes sense but is also an obvious spinoff ploy and not an especially provocative or interesting one.

For a movie that isn’t made by Michael Bay, it sure feels like a Michael Bay movie. Bay, love him or hate him, is a true auteur, so that’s not just a passing comment. It takes effort to feel like one of his movies, and more so to improve on his style. While opinions here are valid and divided, what I will say for me is that the cuts are less frantic and the blocking is better to a point where it’s always reasonably clear who is where and why, and this is nice during the plentiful shootouts and it’s a Godsend during the few fistfights in the movie, all of which are exciting and very slick. It’s not all improvement though, for every cinematic compliment I can levy, Bay also has an inherent sense of style and that is missing. To tally that all up, it’s a reasonably decent aping of Bay’s style with some distinct visibility improvements to the action… but for all of that, it still feels like an imitation of style, not stylish unto itself, and that’s too bad.

The fact is, this plot is not any better or worse than Bad Boys 2 and the humor is more to my personal liking, but that’s the major step up that this movie provides. I thought it was like Bad Boys 2 but a little funnier. Worth seeing, especially if, unlike myself, you actively enjoy the first two, and worth a look even if you didn’t. One personal gripe, especially as a fourth Bad Boys is rumored to be in production? They wasted this title… in the modern era there is no way the third film should have been hamstrung calling the next one Bad Boys 4 Life. I don’t hold that against this, but this review would be incomplete without the observation.