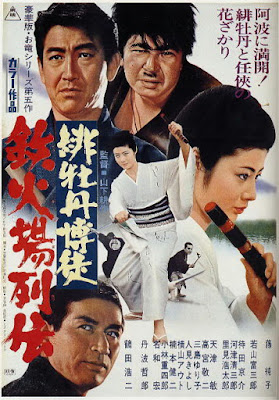 Even by the time I hit the fourth entry, the Red Peony Gambler franchise was running thin for the formula. All four are decent films, but knowing that I was only halfway through the entire run of the series made me hesitant to keep up my enthusiasm. There had been a firm formula established by the second film and by that fourth entry it already felt as though the series was heavily leaning on gimmicks to keep it afloat. It was still working, but there were plenty of red flags fluttering in the wind. Of course, leave it to the fifth film in the series to reignite my admiration. Red Peony Gambler 5: Biographies of a Gambling Room strips back much of the gimmicks from the last few films and focuses on a tightly woven script, impressive layered performances, and strong themes about death, the yakuza life, and roles of the parent.


The first fascinating leap of faith that Red Peony Gambler 5 takes as a film is stripping back the gimmicks of the last few to essentially nothing. While the intriguing Meiji era mixture of western and eastern cultures of the previous entries made for great backdrops for its plotting and characters, even going so far as to have the building of a railroad be the crux of the fourth film, it was eating up more and more of the narrative without adding the depth necessary to let the films soar. In essence, the gimmicks existed to distract from the weaker writing. This fifth entry makes it blatantly clear that it has no intention of doing the same thing. For some fans, this might make Red Peony Gambler 5 feel more basic and less stylish than its predecessors. That’s a fair assessment. What director Kosaku Yamashita does, returning to the franchise for the first time since the original is to go back to what worked in the beginning: layered characters, emotionally embedded plotting, and subtle use of style to enhance the story rather than cover it up. It doesn’t have the trains, modernization, or the unique setting elements that the last couple had - outside of a small secondary plot with a yakuza hitman in a flashy white suit with a gun or two, but it has a stronger heart and soul to the characters that were not utilized as effectively for the previous couple of entries.

Once again, Junko Fuji handles her own in the titular role, this time she's given the immense task of living in a small village as a normal person while she awaits the 29 days of mourning once one of her people passes after being released from prison. She is given this role by an ex-yakuza who has gone to the straight life. This decision to have her, once again, debate the use of her talents as a fighter and her yakuza connections gives her a fresh feeling character arc that the series has lost. Throwing in some plotting that sees her help a man desperately trying to care for a young girl, a girl he feels indebted to after killing her father, and once again navigating the yakuza political pitfalls means that the film is far more interested in analyzing the duality of Oryu’s nature. She’s at times a leader, a peasant, a mother, a killer, and all the while she has to figure out what role she needs to play at what time. She’s all of these things, admirable at them too, but choosing the wrong one at the wrong time could cost her everything. It’s a brilliant maneuver on the film’s part to leap onto this road.

As mentioned above, director Kosaku Yamashita tends to downplay a lot of the gimmicks - both narratively and visually, so many fans might find the film a bit too safe. Most of his style comes in the form of subtle choices, lingering shots or punching up key dialogue like where Oryu must tell a rival ‘no’ without offending him or actually saying ‘no.’ Even the action, as the others are, is more brief and intense than anything where it plays the excitement and violence more realistic and for the emotional center than for thrills and kills. Still, with how strong the performances are and how the writing wraps in some great themes and characters, it’s something of the perfect combination.

Leave it to the fifth entry of a relatively forgotten franchise to be one of the best. Red Peony Gambler 5 is an incredibly thoughtful entry, delivering on the key ideas, character layers, and sharp storytelling that laid the groundwork for this series to thrive. It’s not the most up-front and thrilling of the franchise thus far, but with a film this well balanced and centered on great storytelling, it’s a welcome addition and change of pace.