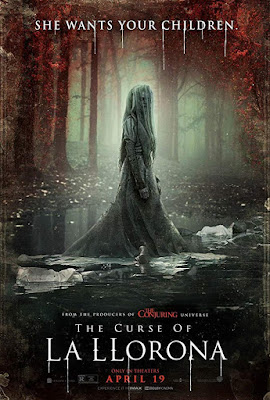 The Conjuring Universe has so much potential as a wide-reaching horror franchise. A lot of the potential can already be seen as the series expands past the Warrens with this year’s (first) Conjuring-Verse film, The Curse of La Llorona. The expansion of the franchise into time frames and places outside of the main characters adds a lot of value to what this franchise has to offer horror fans. Last year’s The Nun was problematic for a lot of reasons, but what it did do right was that the main story itself was in its own unique time and place. The Curse of La Llorona takes it a few steps further by tackling another supernatural story based on “real-world” and only loosely tying it to events in The Conjuring franchise, but allowing it to exist on its own. While the concept is great, the execution of the first film to embrace it results in more of a mixed bag honestly.

One of the great things that The Curse of La Llorona brings to the table is director Michael Chaves in his directorial debut. This franchise has more recently embraced the idea of giving its platform to younger horror directorial talent and it’s obvious that this is the case here too. In terms of a directorial debut, Chaves brings a steady hand to this film that slathers the film in a great sense of atmosphere and grounds the film in that Conjuring style that could have easily fallen by the wayside from an inferior script. Some of the directorial choices are not necessarily new to the franchise, including a “no edit” shot to introduce the audience to the family, but it still works and moments like a montages of faded shots in the third act to kick off the final sequence indicate that he has a lot of talent in his sleeve and, if anything, this film feels like it hinders a lot of his style at times. That says something.

As mentioned though, the major issue that arises in The Curse of La Llorona is the script and general narrative. At the core of its story, this film should work. It utilizes a lot of interesting elements like a religious aspect outside of the usual institutional portions and the parallel concepts about single mothers and the threats they face in raising their children (whether it’s ghosts or work) should have added a lot of depth to the usual ghost has cursed a family plot. The performances for a lot of those characters are impressive too. Patricia Velasquez and Raymond Cruz eat scenery in the film despite the fact that neither are lead characters and are often underwritten in the script. It’s almost sad that the film increasingly feels like a blueprint for a horror film then one that attempts to add the depth, it brushes on. For every great idea, the script will only fringe on it and then return to the formulaic basics. Whether it’s the opening sequence, which visually shows the origins of titular La Llorona, or the parallel between the lead character and her family and a woman who recently lost her children to the ghost, this film loves to give a lot of surface level material and never truly dig into depths and mythology that might have given the film a foundational identity.

This now brings up the point about the titular villain. One of the things that many of The Conjuring spin-offs has struggled with is that when it comes to ghosts, less is more. Fortunately, when it comes to many of the individual scares, director Chaves knows how to jack up the tension and the bathtub sequence that was featured heavily in the marketing is a great example of that. Unfortunately, the film does tend to showcase the villainess quite a bit. She has a fantastic design, her black tears and cracked skin giving her a weathered and unearthly look, but the film loves to show her off and it’s rather detrimental to the entire tension of many of the sequences. The script and narrative also fail to utilize some of her scarier traits for the story and instead rely heavily on her lunging after people. There is a reveal towards the end that once she has held a child when she calls then they will come to her. This siren-esque ability could have added a fantastic element to the film and it’s squandered away for more traditional Scooby-Doo spook and run tactics.

In the grander aspect of things, The Curse of La Llorona is hardly a terrible film and there is a lot of great scares and key moments that work in the film. A large part of this is due to director Chaves who obviously made an impression on Warner Bros/New Line/James Wan as he has already been announced as the director of The Conjuring 3. Still, there’s a sense that the film could have been so much more. It misses out on a lot of the depth and character work that has made the franchise so impactful and it plays it safe in terms of digging further into the cultural influence and mythology that La Llorona carries with her. For a general horror film, it’s still a step above both The Nun and Annabelle in terms of the franchise but fails to reach some of the heights it might have.