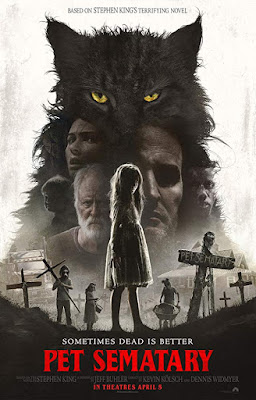 Before leaping into 2019’s latest entry into the Stephen King renaissance, it’s perhaps best to start by laying the groundwork and context towards how I feel about the original Pet Sematary material. The book is terrifying, dark, and heavy, although it is hardly perfect (that’s blasphemy, I know,) it’s also a powerful story that is ripe for cinematic elements. The first Pet Sematary film from 1989 is even further away from perfection, utilizing some great atmosphere and terrifying imagery to power through a script that is massively problematic and muddled with needless subplots. The reason it’s necessary to know this is because this newest version of Pet Sematary certainly assumes its audience has either a) see the previous film b) read the book or c) both. In many ways, it plays on the expectations of the audience by playing up or down certain elements to get the audience to feel or move in a certain way. Like a lot of things in the Pet Sematary universe, this plays out as a blessing and a curse. Like its dual source material, this film struggles to find perfect balance of scares to narrative theme and ultimately stumbles further into a middle of the road approach than expected. Pet Sematary is still a thoughtful and often dark decent into the meaning (or meaninglessness?) of death with some impactful moments, but it just doesn’t reach the heights that it might have in the end.

On paper, Pet Sematary looks phenomenal. Whether it’s the directors of Starry Eyes (my pick for best horror film of 2014) or the stacked casting, this film had all of the right parts to be one of the big cornerstones of the King Renaissance. The performances are nuanced and powerful and while praise will generally be showered (rightfully so) on the three main adult stars of the film, it was probably Jeté Laurence that came out as the biggest surprise for the film and as the film progresses into the third act, she gets to strut some impeccable range that had me hook, line, and sinker into the themes and plotting. It also helps that directors Kevin Kölsch and Dennis Widmyer run with the material here in some exciting ways. Upon a few days reflection after seeing the film, a lot of the tone and nuance that they embed in the visuals and narrative do gurgle to the surface in thoughtful ways that were not particularly obvious as the film was playing. Pet Sematary also trims a lot of the fat. The original film tends to find itself bogged down by subplots that feel like padding. The spat with the father in law always felt stuffy, but this film tends to negate that to nuance instead of making it part of the full narrative and plot. As the film changes some of the key plotting elements from the previous material, it opens up some intriguing character pieces and choices that the film just brushes on to toy with the audience. It’s obvious that Kölsch and Widmyer don’t want to spell things out for the audience and leave things more open which is a very strong choice.

Despite all of these great elements to Pet Sematary, there was a sense that the film probably leans too heavily on its audience having seen the original film or reading King’s book. References are made in somewhat meta ways to pull an audience in certain directions and there are moments where it’s obvious that they wanted the film to not reveal the child’s death in the marketing. Some of it works, including the loose references to the wendigo or plays on lines of dialogue from previous material. The film also suffers a bit from trying to appease those fans too. There is a large piece of me that desperately wanted the film to stray further away from either of the sources. There are some fantastic themes and key ideas in the film that feel brushed over for the sake of making sure they get in some key things that audiences would expect. The use of the mother’s sister Zelda, in particular, is done in a way that she feels almost like an echo scare instead of a full subplot and while that idea is very interesting, there was a sense that the film felt pulled back from taking that further in a new direction.

Naturally, some of the disappointment in the film stems from the immense expectations going into the showing. With time that will fade as I am able to see Pet Sematary as it is versus as what I wanted it to be. For now, the film has some fantastic essentials to its success, including the performances and some of the great character and tonal choices made in the third act, but it’s also a film that could have even gone further (which is somewhat of a bold statement considering the ending) and embrace some of the new spins and interpretations. It’s almost impossible not to compare it to its source materials, both in book and movie form, and the changes made worked for me as the film was able to dig into some fascinating areas, but Pet Sematary also could have been even more of its own thing which is where most of my disappointment found itself coming back to life. In the end, Pet Sematary is certainly a successful remake, but it’s not the quite the home run that it could have been.